Is The New Pope Latino, Italian, Or Both? 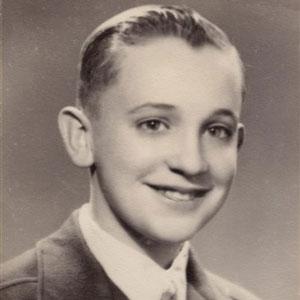 This undated file photo from Maria Helena Bergoglio shows Jorge Mario Bergoglio as a teenager in Buenos Aires, Argentina. Today, he is Pope Francis, and hailed with pride and wonder as the "first Latino pope," a native Spanish speaker born and raised in the South American nation of Argentina. Photo Credit: AP/Bergoglio Family

Is the newly elected, Pope Francis, Latino, Italian, or both? One non-Catholic or casual observer may wonder what difference it makes, why does it matter so much? Well, to millions, it does.

He is being hailed with pride and wonder as the "first Latino pope," a native Spanish speaker born and raised in the South American nation of Argentina. But for some Latinos in the United States, there's a catch: Pope Francis' parents were born in Italy.

Such recent European heritage is reviving debate in the United States about what makes someone a Latino. Those questioning whether their idea of Latino identity applies to Pope Francis acknowledge that he is Latin American, and that he is a special inspiration to Spanish-speaking Catholics around the world. Yet that, in their eyes, does not mean the pope is "Latino."

These views seem to be in the minority. But they have become a distinct part of the conversation in the United States as the Latino world contemplates this unique man and moment.

-"Are Italians Latino? No," says Eric Cortes, who has been debating the issue with his friends.

-"The most European alternative and the closest thing to an Italian," is how Baylor University professor Philip Jenkins described Pope Francis in the Chronicle of Higher Education.

-"Does a Latino have to have indigenous blood?" asked the LA Weekly newspaper of Los Angeles beneath the headline, "Is The New Pope Latino?"

-"Latinos come in all colors and shades and features," Ivette Baez said in an emotional debate on the "Being Latino" Facebook page.

The swirling discussion indicates just how much the man formerly known as Jorge Mario Bergoglio, whatever his ethnicity, means to Catholic Latinos.

"The Latino community tends to pride itself on the accomplishments of our own," says Baez, a Puerto Rican who lives in New Jersey. "And a lot of people are hoping that a Latino pope would bring more of a focus on the problems in Latin America."

"After the president of the United States, he's probably the most influential person in the world," she says. 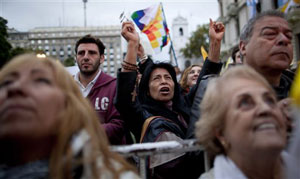 The conversation about Pope Francis' ethnicity is rooted in history and geography. Latin America is a complex region of deep racial and class narratives. The elites tend to be whites of European ancestry; the poor are often dark-skinned descendants of indigenous or African people.

Latinos also can be of any race; many identify themselves as both Latino and white, or Latino and black. So debates were bound to happen with the elevation of a fair-skinned son of Italians born in South America's most European city, a place that has always identified more with Rome and Madrid than Caracas or Mexico City.

Cortes, a 29-year-old son of Colombian immigrants who lives in Philadelphia, says some friends his age are confused about why the pope is being identified as Latino. "Others are assuming it's a ploy to get Latino Catholics more involved," he says.

According to Cortes' definition of Latino, which includes Spanish, African and Indian descent, it's "stretching" to include Pope Francis. "His parents are Italian ... Just because he is born in Argentina does not make him Latino at all," Cortes says.

The logic is exactly the opposite, however, for millions of others. If you are born in Latin America, and share its language, history and culture, they say, you are Latino - period. They point to the fact that Pope Francis loves tango, drinks the traditional South American beverage mate and follows the San Lorenzo de Almagro futbol team.

"Look: If the guy was raised there, lived there, did the culture there, who has the right to take that away?" says Andrew Ysiano, a Mexican-American and publisher of LatinoTimes.org in Stockton, California. "How do you take something away that he was raised by?" 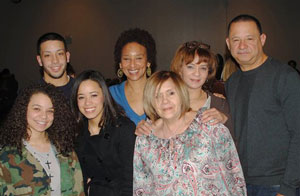 "I consider him Latino," he says. "With a name like Jorge, he has to have the culture, right? I know there has to be some kind of roots there for him."

Benny Martinez, a Mexican-American civil rights activist who lives in Goliad, Texas, says he feels "somewhat proud" that an Argentinian is now pope. "Sure he's Latino. Why not?" says Martinez, who can trace his family's roots to Texas from the 1700s. "Anyone who speaks Spanish and is from Latin America is Latino, I guess."

"But do other Hispanos consider him Latino?" Martinez says. "That I don't know."

Measuring someone's "Latino-ness" - how much they identify with Latino rather than mainstream American culture - is not unusual in the United States. It's the rough equivalent of Americans evaluating each other's patriotism, a way to gauge their loyalty and perspective on life.

And it can hurt.

Vanessa Madrazo, who took part in the Facebook discussion on whether the pope is Latino, was raised in an affluent Michigan suburb by a father born in Argentina and a mother from Brazil. She spoke English in her home, and there were few other Latinos in her area.

An old boyfriend once made fun of her for not knowing what "platanos" are; she had never seen the fried plantain chips in Michigan. When she moved to Miami, another Latina told her she "talked like a white girl."

So when Madrazo saw people on Facebook insisting the pope is not Latino, it struck a nerve. "I am Latina," Madrazo says. "Where do you draw the line?"

Some draw it between the definitions of "Latino" and "Latin American." 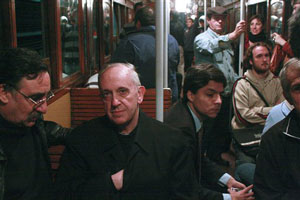 The term "Latin American" was created by the French in the 1860s when it was involved in the invasion of Mexico, said Stephen Pitti, a history professor at Yale University and director of the "Latino/a History Project."

"It's an imperial term," Pitti says.

France was challenging the dominance of Spain and Portugal in the Americas, he says, so it wanted to redefine the region as connected to all Latin-based languages. The name stuck as new nations gained independence and sought more regional cooperation in the late 1800s and early 1900s.

Pitti, and many other U.S. scholars, say there is a difference between "Latino" and "Latin American."

Latino is commonly, but not exclusively, used to describe people of Latin American descent in the United States, Pitti said. In Latin America itself, people tend to identify themselves by their native country, such as Argentinian, Panamanian or Mexican.

Another factor in the debate is the term "Hispanic." It descends from Spain and was popularized decades ago by government agencies, Pitti said. But many dislike it because they connect it to the conquest of the Americas, or to recent U.S. arrivals who speak only Spanish. Many prefer Latino because they feel it describes a more accurate mix of indigenous, African and European ancestry, instead of strictly European.

That connection to Europe is why Sharon Toomer of New York City does not think the pope is Latino.

"All the context, the colonization and conquest, is important," says Toomer, the publisher and editor of BlackandBrownNews.com.

Baez, the Puerto Rican, does consider the pope Latino. She sees traces of "internal racism" in some Latinos' skepticism over Pope Francis' ethnicity.

"There's a stereotype of Argentinians believing to be of pure European descent and identifying themselves less with other Latinos," she says. "Then some people think if you're of European descent, then you're less of this or more of that."

As malleable as it may be, Pope Francis' identity was clearly a factor in his selection by the Catholic church, which now has more believers in Latin America and Africa compared with its ancestral home of Europe. Asked at a news conference why an Italian pope was not selected, Cardinal Andre Vingt-Trois, the archbishop of Paris, said that Pope Francis "is not part of the Italian system, but also at the same time, because of his culture and background, he was Italo-compatible."

He also feels compatible to Latin Americans like Patricia Toney, a Hispanic studies instructor at the College of William and Mary. Pope Francis has shown an unquestioned dedication to the many poor people of Latin America, she says, which is why his selection was so important.

"It is a big deal," says Toney, who was born in Peru and raised there, in Bolivia and in Colombia. "All Latinos, Latinas, Hispanics, Latin Americans or whichever other label you may want to use, relate to him, and he relates to us. Our reality is different from American Catholics."

When it comes to ethnicity, geography can be destiny. If Pope Francis' parents had immigrated to New York City instead of Buenos Aires, he would be seen as a white Italian-American. But until he makes a definitive statement, his identity will remain subject to debate.

"I would love to hear the pope say, 'I am Latino,'" Baez says. "But that's something for him to really answer."