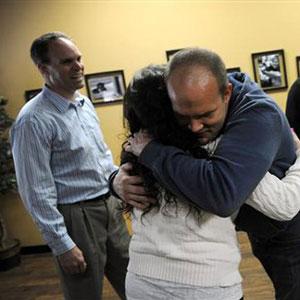 Dave Neuhausel, a pastor with Denver Community Church gives a hug to an undocumented immigrant, a parishioner at Providence Bible Church, after a prayer gathering at the church on Feb. 14, 2013. These pastors, all of whom are Evangelical Immigration Table signatories, are part of a movement in the evangelical church who are becoming strong promoters of immigration reform. Photo Credit: AP/ The Denver Post/Helen H. Richardson

DENVER (AP) - Citing a new focus on biblical passages that call for Christians to treat foreigners and strangers well, Colorado evangelicals are turning into a potent force in the push for immigration reform.

Focus on the Family and some of the 200-plus lesser-known evangelical groups and congregations in Colorado have become surprise lobbyers for controversial reforms that include allowing immigrants to remain in the country.

Evangelical leaders say a majority of evangelicals, who six years ago in a Pew Research poll deemed immigrants to be a threat to American culture and a burden on the economy, are making the shift after rereading the Bible with immigration in mind.

They have also changed their thinking about immigration as a result of ministering to and mingling with illegal immigrants in church settings.

The shift is taking place on a national level where evangelicals are participating in a 40-day "I Was a Stranger" campaign of praying and studying Scripture related to immigration. But Colorado is one of three states being highlighted by national evangelical organizations in the push to bring evangelical clout to bear on immigration reform. Florida and Texas are also viewed as key states.

The evangelical change from no to pro on immigration reform is not a reaction to the Latino snubbing of the Republican Party in the past election, Colorado evangelical leaders say. Instead, it is rooted in an attitude shift that has been several years in the making within a group generally known for social conservatism. It is also rooted, they say, in morality rather than politics.

"We had already developed principles ourselves based on what we believe," said Tom Minnery with Colorado Springs-based Focus on the Family. "We had been hoping for a time when progress could be made on the issue. And now, times have changed."

Jason Janz, pastor of the Providence Bible Church in Denver, described the evolution he is seeing in the evangelical movement as "a groundswell."

With 25 percent of voters identifying themselves as evangelicals, and with Latinos forming the fastest-growing group in evangelical churches, it is a groundswell hard to ignore.

"I do think we have the potential to be a very strong voice along with other strong voices," said Janz, whose church holds liturgical services in English, Spanish and Swahili.

Daniel Carroll, a distinguished professor of the Old Testament at the Denver Seminary, attributes the change on immigration to two factors.

One is a new awareness of the "cover-to-cover" messages in the Bible about showing kindness to strangers or sojourners - references to immigrants, in the evangelical view.

The second is that many churches have been sharing their spaces with Latino churches or have been providing aid to immigrants or actively recruiting them as members. As a result, evangelicals have interacted with undocumented immigrants on a personal basis and have seen how the current immigration laws can tear apart families and demean good people, he said.

"They see these immigrants can actually be an asset and a resource for the majority Christian church," said Carroll, who is serving as the Colorado spokesman for the National Hispanic Christian Leadership Coalition, as well as representing a seminary with more than 1,000 students from a broad political spectrum of 40 evangelical denominations.

Colorado evangelicals have joined a national immigration-reform movement that began two years ago with discussions among evangelical leaders and resulted in the formation of the Evangelical Immigration Table. The group includes more than 150 leaders, including the left-leaning Sojourners Christian ministry and the conservative Southern Baptists.

A week after the November election, the Evangelical Immigration Table sent an open letter to congressional leaders stating their support for "compassionate and just treatment of immigrants."

The letter specifically calls for securing borders, keeping families together and creating a path to legal status or citizenship.

The path to citizenship is one proposal that reveals some splits within the evangelical immigration-reform movement. It is not supported by all evangelicals. Focus on the Family president Tim Daly was a signer of the letter, but his organization stops short of supporting citizenship for immigrants who came to the United States illegally. 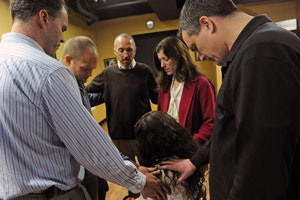 Many evangelicals also don't support President Barack Obama's push to include spousal visas for those in same-sex partnerships.

Focus on the Family wants an emphasis on keeping families together in immigration-reform measures but doesn't recognize same-sex partnerships as families, Minnery said.

Carroll said he expects to see more evangelical consensus on the issue of citizenship for undocumented immigrants.

He said he also sees evangelicals teaming up with other churches that long have been politically active on immigration issues. Those include the Catholics and the Quakers.

In proof that immigration reform has broad religious support in Colorado, representatives of mainline Roman Catholics in the state and leaders of Focus on the Family and many other evangelical churches and organizations will be participating in a meeting on immigration next month at the Evangelical New Life Church in Colorado Springs