Did Hip-Hop Help Get Obama Elected? 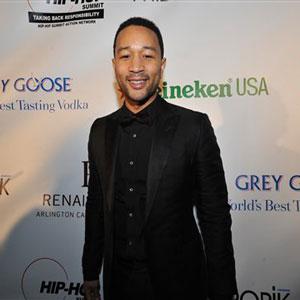 "I think hip-hop had a role in making sure we elected a black president in America because we made it so that black people were in people's homes ... through our music and through our culture," the R&B crooner said Sunday night at the Hip-Hop Inaugural Ball.

"I think it made Barack Obama and more people like him possible, so I'm really thankful for hip-hop and the role it plays in society," Legend said.

Legend received the humanitarian award. Hip-hop pioneers MC Lyte and Doug E. Fresh were given lifetime achievement awards. Fresh even hit the stage, beat boxing while comedian-actor-singer Wayne Brady cooed Marvin Gaye's "What's Going On?" At one point, Brady even busted out his own rhymes.

Rapper Yo Yo earned a roaring cheer when she hit the stage to honor MC Lyte; Lil Mama also paid tribute to the "Ruffneck" rapper.

2 Chainz, who had a breakthrough year with his Grammy-nominated solo debut and multiple rap hits, earned the street soldier award for encouraging young voters as a spokesperson for the Hip-Hop Caucus' "Respect My Vote!" campaign.

"Doing my thing on the charts is one thing, but to be getting honored on another avenue, it just feels like a blessing," he said in an interview. "I'm keeping my head leveled and staying humble."

Actress Rosario Dawson won the vanguard award for her work as chairman of the Voto Latino organization.

"It's time to step out of the shadows. It's time to not just be talked about by other people, it's time to take the leadership ourselves and that first step of leadership is voting," Dawson said of the importance of the Latino vote.

"I got a call from the president and he asked me to perform his favorite song," she said before singing the R&B jam "Hope She Cheats on You (With a Basketball Player)."

Then she sang "Butterflies," a song she co-wrote for Michael Jackson's 2001 "Invincible" album.