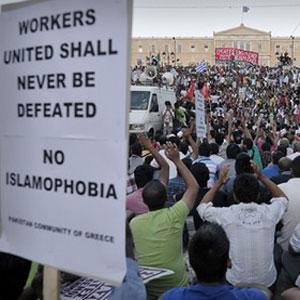 Thousands of immigrants to Greece, mainly from Pakistan gather at Athens central Syntagma square in front of the Greek Parliament on August 24, 2012, during their protest rally against the recent violent attacks on immigrants by ultra nationalist groups and the police operations in order to arrest undocumented immigrants. Photo Credit: AP/Louisa Gouliamaki

Rights groups warn of an explosion in racist violence over the past year in Greece, with a notable surge since national elections in May and June that saw dramatic gains by the far-right Golden Dawn party. The severity of the attacks has increased too, they say. What started as simple fist beatings has now escalated to assaults with metal bars, bats, and knives. Another new element: ferocious dogs used to terrorize the victims.

As Greece's financial crisis drags on for a third year, living standards for the average Greek have plummeted. A quarter of the labor force is out of work, with more than 50 percent of young people unemployed. An increasing number of Greeks can't afford basic necessities and healthcare. Robberies and burglaries are never out of the news for long.

Greece is a major entry point for hundreds of thousands of illegal migrants seeking a better life in the European Union. Foreigners have become a convenient scapegoat. Some victims turn up at clinics run by charities, recounting experiences of near lynching. Others are afraid to give doctors the details of what happened — and even more afraid of going to the police.