Blocking Millions Of People Of Color From Voting 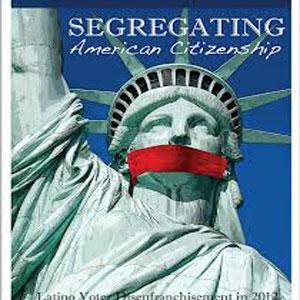 New laws attempting to block the right of Hispanics, and other people of color to vote might eliminate millions of possible votes in the upcoming November Election. Photo Credit: gstatic.com

The tweaking of voting laws in 23 states, including photo identification laws, requirements to prove citizenship and attempts to purge “non-citizens” from voter rolls, could have a "disproportionate effect" on the ability of people of color to vote in the upcoming election. In fact, these changes might dissuade up to 10 million Hispanics alone from voting, according to a report released September 24 from the Advancement Project.

“State after state moved to obstruct the ability of millions of Latino citizens to participate in our democracy,” said Advancement Project Co-Director Judith Browne Dianis. “This concerted effort targeting Latinos and other voters of color not only undermines the principles of our constitution’s guarantee of equal protection, but also impairs the fundamental American value of ensuring all citizens have an equal voice.”

The report, "Segregating American Citizenship: Latino Voter Disenfranchisement in 2012," notes that Hispanic voters (President Obama won 67 percent of the Hispanic vote in 2008, according to exit polls) could make the difference in a tight presidential race, especially in battlegrounds such as Colorado, Florida, and Nevada where there is a surge in the Latino population.

In 2010, Latinos made up more than 10 percent of the nation’s eligible voters and 8 percent of registered voters, according to the 2010 Census. Yet of the 21.3 million eligible Latino voters in 2010, more than 14.5 million were either unregistered or simply didn’t vote. “Since 2010, more than 3.7 million Latinos became eligible to naturalize as citizens, and an additional one million young Latino citizens became eligible to vote at age 18. All told, the potential Latino electorate could top 25 million voters, or 12.2 percent of the nation’s total eligible voters,” according to the Advancement Project report.

But the new study states: “Voter suppression laws and policies threaten to relegate eligible Latino voters to second-class citizenship and impede their ability to participate fully in American democracy.”

The report points to an onslaught of new state-level voting restrictions intended to lessen participation by these Latinos and other eligible voters of color. Currently, 16 states target naturalized citizens on voter “purge lists,” with requirements to prove citizenship effective in three states, and strict photo ID laws effective in nine states, according to the study. The report notes that, “An estimated 16 percent of Latinos do not possess a requisite photo ID, compared to six percent of non-Hispanic whites, and the targeted voters include a vast majority of purging for Latino, African American, or Asian American.”

Last month, a three-judge federal appellate court in Texas struck down that state’s voter ID law, unanimously ruling the law placed “strict unforgiving burdens on the poor” noting the state’s arguments in defense of the law as “unpersuasive, invalid, or both.” Currently Pennsylvania's voter ID law is also making its way through the courts.

“America is an increasingly diverse nation, but ballot access should be identical for each citizen regardless of race or country of origin,” said Katherine Culliton-González, director of Advancement Project’s Voter Protection Program.

Latinos now increase their role as a voting bloc, comprising more than 12 percent of the nation’s eligible voters and 8 percent of registered voters. Nearly half (45 percent) of the nation’s Hispanic population lives in just 10 metropolitan areas and over 75 percent live in 60 of the largest Hispanic metropolitan areas, according to an analysis of Census Bureau data by the Pew Hispanic Center. Of those Top Ten, three are in Texas, one in Florida, and one in Arizona.

According to the Advancement Project, the new laws - viewed as discriminatory voting policies - threaten to undermine the participation of millions of Latino citizens during the 2012 elections since the number of Latino voters in many states affected by these policies exceeds the margin of victory of the 2008 presidential election.