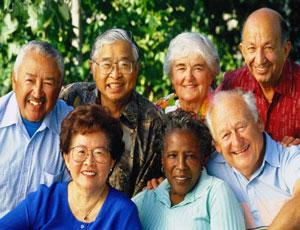 Although this photo illustrates baby boomers as older seniors, the reality is that boomers range in age from 48-years-old to 66-years-old. So for those who fall within the younger age range, many have children still attending high school, and as such, they are not boomerang children. Photo Credit: ageclantonchurchofgod.com

As the baby boomer generation, and this means parents ranging in age from 48-66 years old, including all races & ethnicities, begin inching their way toward retirement through a turbulent job market, their plans to bask in the glow of retirement are now clouded with the recent upswing in welcoming adult children back home. The adult children involved in this upswing are “the boomerang” generation.

The adult “boomerangs” initially lived on their own, but experienced setbacks forcing them to return home and rely on their boomer parents for support. The setbacks range from divorce, loss of income, lack of education, finding suitable paying jobs, and spending beyond their current income levels; these are just some of the concerns of many baby boomer parents. “We have a hard time saying no as a culture to our children, and they keep asking for more,” a parent told a reporter from the Associated Press.

When an adult child goes through a divorce, many move back into a parent’s home to pick up the pieces and eventually move on. Unfortunately, not only does a divorce take its toll, the difficulty arises as boomerangs try to take care of their children in a society that continually raises the cost of living, but not the wage of those struggling to get by. Both the parent and the grandparent struggle to survive.

“When you have highly stressed parents raising kids, it is a win-win situation when your boomer parents can help with childcare or housing costs, “ said Stephanie Coontz, a professor of history and family studies at Evergreen State College, and author of “The Way We Really Are: Coming to Terms with America’s Changing Families.”

One of the biggest challenges of boomerang children moving back in with their boomer parents is the strain on the intergenerational bond. Many cultures celebrate their families having a strong intergenerational blend, but American culture has a harder time accepting the weaving of different family styles into one household. It is important that each member of the family develop their own independence separate from the family unit.

“If your parents don’t have a social network, help them create one so they are not totally dependent on you for all interactions,” said Susan Newman, a social psychologist and author of “Nobody’s Baby Now Reinventing Your Adult Relationship with your Mother and Father.”