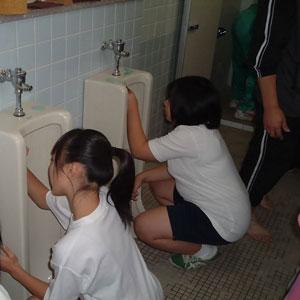 SERIOUSLY? We want to make the poor poorer by having their children scrub toilets at the schools? Photo Credit: dannychoo.com

With more than one in five children in the United States now living below the poverty line, the answer for Republican Presidential candidate Newt Gingrich is for them to "learn the value of work" by becoming school janitors.

Seriously, learning to scrub a toilet is Gingrich's answer to millions of poor children, as if they aren't already suffering enough with a lack of nutrition, poor education, and limited or having zero access to healthcare, and housing.

After Fox moderator Juan Williams challenged Gingrich at the South Carolina presidential debate over racist comments that Black Americans "need to demand jobs rather than food stamps," and that poor kids should work and become school janitors, Gingrich only showed himself as more unsympathetic and ignorant to the bleak reality of those who live in poverty.

"You could take one janitor and hire 30-some kids to work in the school for the price of one janitor, and those 30 kids would be a lot less likely to drop out," Gingrich said. "They would actually have money in their pocket. They'd show up for work."

Does he not realize that the parents of these kids cannot even get work as janitors? And if they could, that their children would only then have the opportunity to better concentrate on their schoolwork, rather than spend time worrying about whether or not they may eat a decent meal?

Gingrich finished with, "I believe every American of every background has been endowed by their creator with the right to pursue happiness. And if that makes liberals unhappy, I'm going to continue to find ways to help poor people learn how to get a job, learn how to get a better job, and learn someday to own the job."

As the former House Speaker consistently attacks Obama as a class warfare president, this hypocrisy and ignorance at its most reveals that he all but blames the poor for their tragic circumstances.

Other GOP candidates have echoed similar classist rhetoric through platform slogans and clichés such as "Pulling Yourself Up By Your Boot Straps," and "The American Dream is at Everyone's Reach.”

What's more, is that a disproportionate percentage of those considered as poor children are minorities, including Black children at 38.2 percent, Hispanic children at 32.3 percent, and children identified with two or more races at 22.7 percent, according to The U.S. Census Bureau.

Tragically, especially since the United States is considered the world’s wealthiest nation, more than 15 million children live in poverty.

Gingrich may call President Barack Obama “The Food Stamp President,” but at least Obama is trying to make sure that the most innocent segment of our population receives humane treatment, simply by being fed.

As one of the richest countries in the world, it is unacceptable that 15 million children are living in poverty. These are the most innocent and vulnerable populations in this country and they deserve to be taken care of properly. In reference to Gingrich's ideas to put poor children to work as janitors I think is just ridiculous. All children should be afforded the right to have a safe place to live and regular meals and the space to have a childhood. This is not a thirld world country where we put children to work in sweat shops. There is no excuse for the amount of people that are living in poverty. It is not necessarily a matter of resources because we have a surplus of resources to feed the entire world, its about access to those resources and whom we deem worthy of receiving benefits from those resources. Basic needs such as food and access to healthcare should be mandatory in a country that prides itself on being a "moral leader" to the rest of the world.