The Complexity Of The Obama Presidency: Implications For Black Americans 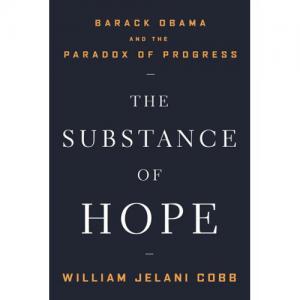 The Substance of Hope

Utilizing his skills as a historian specializing in post-Civil War African-American history, and 20th century/Cold War politics, Professor Cobb, author of To the Break of Dawn: A Freestyle on the Hip-Hop Aesthetic and The Harold Cruse Reader, analyzes Obama's election without succumbing to the naïve declarations of a post-racial utopia, or the Afro-pessimism, who claims his presidency means nothing.

Cobb's study of the Obama presidency, which makes a perfect bookend to Jabari Asim's excellent book, What Obama Means: For Our Culture, Our Politics and Our Future, examines the tensions his candidacy exerted against the sixties-born Civil Rights old guard politicians – specifically, Jesse Jackson, who once accused Obama of "acting like he's white" when he refused to join a Jena Six rally – and with a younger "Joshua Generation" of Black politicos like, ironically, Jesse Jackson, Jr., who publicly broke with his father and supported Obama.

The complex and controversial pastor Jeremiah Wright's full history as a mostly positive figure in the African-American community is fully dealt with (enterprising historian that he is, Cobb reminds us that it was Dr. Wright's voice we heard on Wynton Marsalis 1989 CD, The Majesty of the Blues).

The author also slams the sloppy thinking behind the questioning of Obama's black identity, when over 90 percent of African-Americans are of mixed heritage. "Declaring the Barack Obama was not black," he writes "… meant the retroactive removal of Frederick Douglass, W.E.B. Du Bois, Bob Marley, Booker T. Washington, Malcolm X, and Adam Clayton Powell from the roster of black achievers, as all had known white ancestry."

Cobb also posits Obama's proof of blackness in his exceptional "race speech" in Philadelphia in 2008, and the search for blackness he eloquently penned in his memoir, Dreams from my Father, comparing Obama's book with W.E..B Du Bois' classic, The Souls of Black Folk: Both are light-skinned men, raised in non-black locales, with absentee fathers, who migrate to black enclaves as adults to find themselves.

So what does all of this mean for the progress of black people? Cobb rightly acknowledges that while the Obama presidency is a historic, game-changer for black America's political development, which is unfinished due to crime, poverty, sickness, and miseducation. In his words, "Barack Obama is simply a man and a president. His election is best understood as a passing respite, a brief moment of rest before it falls to us to once again turn our shoulder to the wheel of history."