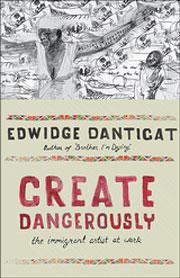 The island of Haiti, the world’s first Black republic is the poorest country in the western hemisphere, the land of voodoo, coups, famines, refugees, tornadoes, and earthquakes, and home to a resilient people who refuse to die. In her novels and writings, the brilliant Haitian-American novelist/essayist Edwidge Danticat – author of the award-winning books Breath, Eyes Memory, and Brother, I’m Dying - has given the world a more nuanced view of her ancestral homeland, and challenges and contradictions her fellow Haitians encounter in the United States.

In this haunting and heartfelt book of essays, Danticat – drawing on the inspiration of Albert Camus to “create dangerously, for people who read dangerously”- tells the stories of the Haitian people through the prism of an American immigrant, which, for her is an advantage because “two different countries are forced to merge within you,” she writes. “The language you were born speaking and the one you will probably die speaking have no choice but to have [a] common place in your brain and regularly merge there.”

Danticat navigates the Haitian-American double-consciousness, delivers meditations on life and death Creole–style. She shares an appreciation of the legendary Haitian-Puerto Rican artist Jean-Michel Basquiat, a eulogy to her aunt, who looked after family property in the country, and a remembrance of brave Haitian radio announcer Jean Dominquez, assassinated in 2000. And her moving meditation on Haiti’s bicentennial in 2004, where she ponders how her country might have fared through the years if it did not have to pay reparations to French colonial masters, and if the United States didn’t wait six decades to recognize the new nation.

What emerges from Danticat’s powerful and poetic prose, takes the reader into the labyrinth of the Haitian-American experience through the lifeline of literature. “Writing,” she writes, “knowing in part that no matter how trivial your words may seem, someday, somewhere, someone may risk his or her life to read them.”

In light of the bizarre return of dictator “Baby Doc” Duvalier, this is as prescient, as it is poetic.