"A Raisin In The Sun" Inspires "Beneatha's Place" 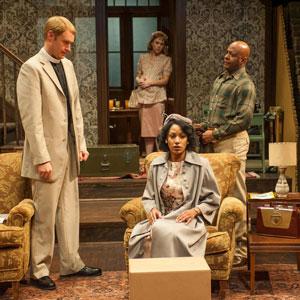 Racial tensions are implicit in both acts of "Clybourne Park," but the play excels in linking them with other forms of discrimination and hate. Pictured from left: Grant Goodman, Greta Wohlrabe (back), Marti Gobel, James T. Alfred. Photo Credit: Michael Brosilow

BALTIMORE (AP) - Growing up in Britain, Kwame Kwei-Armah saw the American classic "A Raisin in the Sun" perhaps more often than any other play, with its powerful portrayal of race relations.

More than 50 years after the debut of "Raisin," the 2011 Pulitzer Prize-winning drama "Clybourne Park" picked up on the story. It was striking to Kwei-Armah for its frank take on race and made him want to respond.

Now the 46-year-old British actor, director, and playwright is introducing a new story inspired by Lorraine Hansberry's "Raisin" of 1959. "Beneatha's Place" launches his American career in his second season as artistic director in Maryland’s state theater, Baltimore's CenterStage, after an award-winning career in London. The new production plays in rotation with Bruce Norris' "Clybourne Park," which won a Tony Award last year for best new play.

The two spinoffs from "Raisin" staged as, "The Raisin Cycle" through June 16 with the same cast under director Derrick Sanders. Each actor plays two roles in each play.

PBS is filming a documentary about the project to broadcast in October.

On Broadway and on screen, "A Raisin in the Sun," followed the Younger family, living in a dilapidated Chicago apartment, striving to escape poverty, and move to a new house in a white neighborhood. "Clybourne," which is one of the nation's most-produced plays, is set in the same house when it's sold again in 2009, this time to a white family while the neighborhood is primarily black.

The new play, "Beneatha's Place," picks up the story of Beneatha Younger, the young intellectual from "Raisin," and follows her journey over 50 years, moving to Nigeria, and to a American university where she becomes dean, tangling with white faculty over whether the university should replace the African-American studies program with a degree exploring white privilege.

Kwei-Armah told The Associated Press about his inspiration for "Beneatha's Place" and the "Raisin Cycle" in his adopted city.

AP: How did you come to know Lorraine Hansberry's "A Raisin in the Sun," and how has that story influenced you?

Kwei-Armah: I read it at school, and I saw the film, of course, starring Sidney Poitier back when I was a young boy. Later, I saw the play in London, and I became a fan.... But actually, I became really fond of Beneatha. And I became slightly like Beneatha in my early 20s. I became political, and I began to find politics - pan-African politics. I began to find those things interesting intellectually.

AP: Some 50 years after "Raisin's" debut, what struck you about "Clybourne Park?"

Kwei-Armah: Well, I thought rather wonderfully what Bruce did is he created a wonderful, brilliantly crafted narrative. It did what we really like theater to do, which is to be a wonderful catalyst for a debate.

AP: Did you find something offensive in "Clybourne Park?" 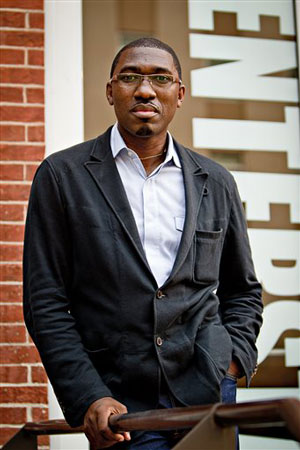 Kwei-Armah: Offensive is a strong word. I found myself questioning one or two of the connotations. I do say connotations. I don't think Bruce went out to say this, nor do I somehow assign him the term racist or anything of that ilk. But I found myself questioning the connotation of the play, which was, in my reading, that whites build and blacks destroy. In Act I, the antagonist says, if you let them in, one by one they will enter and then they will destroy. Then lo and behold, we meet Act II 50 years later, and it is destroyed. The neighborhood is destroyed.

If we left it there, that might be fine, but then the new family coming in was a white family in order to improve the area once again. The connotation that gentrification is white flight equals black blight is one that I found worthy of debating and dancing with.

AP: When did you know you wanted to tell a different story?

I had to wrestle immediately with the contradiction of knowing that I had some conversation with that play around the connotations that I've spoken about as a man of color, and yet, as an artistic director, the desire to give my audience what they are asking for.

AP: What did you set out to do with "Beneatha's Place?"

Kwei-Armah: I think I simply wanted to continue the conversation. I didn't want the conversation to end with "Clybourne Park" when we speak about the Youngers and their dreams. I wanted to have a conversation about ownership because I think that's what all three plays are about.

AP: What made you want to delve into the culture of academia and African-American studies? 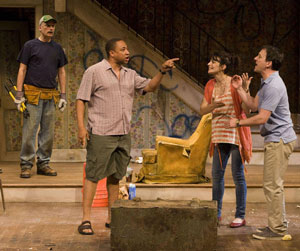 Kwei-Armah: I find race fascinating in America. As a foreigner and someone now living in this country, I find that race is far more at the heart of our politics than say it might be in Britain. So, I found myself wanting to find an area where one could discuss ownership, cultural ownership. I found that to be ripe.

AP: What kind of challenge is this for the cast to present two plays at once?

Kwei-Armah: Bloody huge. They're all playing four characters. Trying to get your head into one is enough. Trying to get into four, it's tremendously hard. But they've been rather brilliant, actually, being able to dance, to jump from one play to the next.

AP: Did you have any second thoughts about starting your American career with such a big undertaking?

Kwei-Armah: I wake up most mornings thinking... "What were you taking in order to think that you could or should even embark upon this huge, mad project?" It's Goliath, man, it's David and Goliath. It's madness.