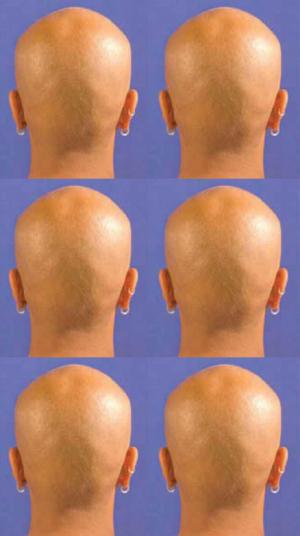 Shaved heads are not always a fashion statement

Shaved heads were in fashion when six members of the Colon family became bald within one week. But they didn’t go bald for fashion’s sake.

Escolastico (Esco) Colon, his father, brother, uncle, and brother-in-law went under the razor after Esco’s wife, Iris, was diagnosed with breast cancer in 2002 and began losing her hair due to chemotherapy and radiation.

“Iris was losing big clumps of hair from the treatments, and one night she came out of the shower, crying,” Esco says. “So I said, ‘let’s both shave off all our hair’.”

The next day, their hairdresser helped the couple get their trendy new do.

“It was funny and sad at the same time,” Iris says.

“We’ve always had solidarity as a family,” Esco says. “So we weren’t surprised when the others chose to go bald with us.”

While Esco wears a short-cropped haircut today, his brother and dad remain shaved.

But this cancer wasn’t the first fight Esco faced. He was born of Puerto Rican descent in New York City, and lived in Bridgeport, Connecticut, as a teenager.

“It was a rough area (Bridgeport), with a lot of street crimes,” Esco says. “Some friends and I usually walked to school together, and escorted some of the girls we knew. There were metal detectors at our school.”

The tough times growing up in Bridgeport, however, gave Esco the skills that allowed him to develop a good rapport with Spanish-American teens, as the volunteer youth coordinator for St. Andrews
Church in Cape Coral.

“At first, these kids from varied cultures had conflicts, and the games were chaotic,” Esco says. “But once I gained their respect, they started enjoying the games, rather than fighting about them.”

Esco kept his full-time job as a city bus driver and managed the housework while caring for Iris and their daughters, Vicki and Elaina, who were 10 and 3 at that time.

“I wanted him to keep coaching the teens, but he decided to stop for a while and focus on us,” Iris says. “I did find time to play in their pick-up games.

“Having family support made it all possible,” she says.

Today, Esco has returned to the sidelines full-time, and is a volunteer coach for Elaina’s soccer team in the Cape Coral Soccer Association. Iris, Esco and Elaina enjoy watching 16-year-old Vicki perform in musical theater.

“We’ve made it through some tough times,” Esco says, “and that reaffirms our faith in God, and the power of strong family ties.”

I love when I read or hear about these types of stories. Women with breast cancer are sooo strong and they strong because they see that they have support and love from those who are close to them. Some days are better than others and everyone needs a support system. Love these stories!!