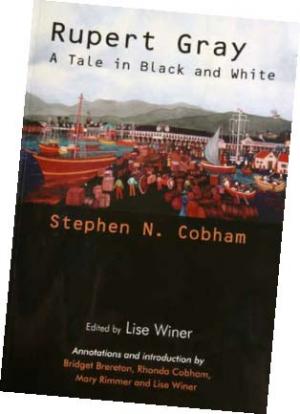 Book cover, "Rupert Gray: A Tale in Black and White"

I’ve always been a floater, a sharp-tongued, curly-haired imp in an extended family where children are seen, not heard, and recriminations were silent, not felt.

My father was an ambitious black man from the wrong side of the Port-of-Spain train tracks, prone to education and bouts of the travel bug. My mother’s people, the Indo-Trinidadians, journeyed from India to rural Trinidad more than a century ago. I am the product of dreamers and indentured laborers. I am the product of defiant love.

I could sense it even as a child, this underlying tension on my mother’s side. My elder brothers and I were different and we knew it. We were family, but not really. We turned on each other as children and sought each other more as adults, the only sanctuary we knew, the only real family we had.

Marcus was always the diplomat and Daryl, the numbers guy. I walked around with notebooks of crappy poetry and proclaimed I wanted to be a writer at 7-years-old. I had a gift, my father said. Beyond encouragement, that was all he would say.

I’ve always had a vague notion as I struck out in the world that there was a playwright on my father’s scattered and reticent side, maybe even a writer like me. Digging into the past, though, is like stepping into an unwelcomed fog.

My paternal family history exists in fragments. I know about the colleges my uncles attended as teenagers and the fire that destroyed their childhood home as men. I know a few names, but little else. Then, recently, that changed.

“Take the name of this book,” my father said suddenly during our weekly conversation between Florida and Trinidad. "Rupert Gray: A Tale in Black and White. Your great-grandfather wrote that.”

It was a gift from my father, one, I usually have to struggle to receive, yet here it was.

I met my paternal grandfather for the first time at his burial. It is with my maternal grandmother that we spent family Christmases and summers getting into scrapes. And, it was with those cousins that we lost many a cricket ball in the thick brush next to her house.

I fell into a dizzying and triumphant Googling frenzy after the announcement, because now I had a name. My great grandfather was an author. I found him on Barnes & Noble.

More than 100 years since it was published, 24 years after I'd first picked up a pencil, 19 years after my father first recognized my talent, he told me where it came from, told me about my invisible muse—told me about my future, forged in the past.

The obvious question I suppose would’ve been, and still is, “Why wasn’t I told before?” But I was too grateful, too elated to bother.

I inhaled the book synopsis, the author description and the articles on the book’s May 2006 re-launch. The historically significant novel dealt with interracial courtship as well as parental and societal disapproval. They said my great-grandfather was likely a mixed-raced man. How history repeats itself.

I began to imagine what he would have been like: A skinny, norm-defying law clerk, perhaps, tap-tapping out stories by candlelight on an ancient typewriter, struggling with his decision to give voice to such a taboo issue. Had he been there all along when I woke in the middle of the night, grappling for a notebook in the dark to pen frenzied thoughts by lamplight?

For the first time ever, I felt grounded—as if I had a legacy, something tangible and tenuous all at once. I wondered if my great-grandfather had stirred my words with his spirit, blessed my inspiration with his touch, and loved me without knowing me—as I loved the idea of him before I even knew he existed.

In the time since, a distant relative in Maryland, who was also searching for her ethnic roots, suddenly contacted me. I started building my family tree in conjunction with hers, and I learned of other Cobhams I want to locate.

And I have learned that my family roots grow deeper than my great-grandfather and me. There are families out there—in Panama, Barbados, Trinidad, and Guyana—who share my name and my blood. I will find them. I know that now.

It might seem that all I have left of Stephen N. Cobham is a hard-covered book and questions. But he has also left me this name, this family, these words and a challenge, now rooted, to seek out our stories and find my own.