Shades of Poverty ... Not Limited To Race Or Ethnicity 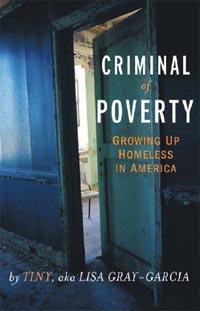 Poverty is an equal opportunity employer

The struggle to survive is a universal theme that is not limited to race, ethnicity, religion or geography. Poverty exists on every continent. The World Bank, a global crusader against the effects of poverty, reports that 70 percent of Nigerians live on less than $1 a day, and 30 percent of India’s population lives in poverty. Even the United Kingdom monitors its poor, which at last count stood at 9 million people.

The United States of America is one of the wealthiest nations in the world but is not immune to the consequences of poverty. Nearly 37 million U.S. citizens were living at or below the poverty line in 2006 — 7.8 million families.

Lisa Garcia Gray, affectionately known as “Tiny”, knows poverty intimately. Raised in a single parent household in California’s bay area, Gray witnessed her mother Dee’s “soul killing” battle against poverty. “My mom was an orphan. She was African, Irish and Puerto Rican and was tortured in foster homes and orphanages,” Gray says. “She came out of that with no family, no support, and barely made it through college, got herself a degree and raised us as a poor single mother in the U.S.”

Enduring poverty sparked a call to activism in Gray and her mother. Together, they launched Poor Magazine, a publication focusing on issues facing poor people. The realization of their publication came through a series of bitter circumstances. Gray says, “I was incarcerated for crimes of poverty. In this case, me and mom were sleeping in our own car. It’s illegal.” But Gray’s mother was able to solicit the help of attorney, Osha Neuman, who saw more than a client or someone stuck in the system. Gray says he became her advocate.

The San Francisco based civil rights attorney turned several thousand dollars in fines into a community service assignment for Gray, compelling her to ask herself, “what did she intend to do with her life?” Gray knew she was a survivor, having dropped out of school at 11-years-old to work and support her mother and sister. To this day, she says her Ph.D. in poverty replaced her formal education, but she made the degree work for her. She knew she could write. Her mother knew where to find inspiration. Lisa says, “My mom started attending with me some ethnic and black studies classes with scholars like Angela Davis and they started to give me consciousness. I started to write more pieces and get them published and people said they’re great work but it’s too much misery.”

Her drive to rise above poverty fueled additional projects, including a non-profit agency that promotes activism and art from the poor community, and a book titled, Criminal of Poverty: Growing Up Homeless in America. As a writer Gray identifies herself as not only an activist, but an artist. She communes with others within her organization who consider their art — either through journalism, poetry or theatre — as valid therapy. She says, “I believe one of the ways we thrive as people is through our spirituality and our art whether we’re in poverty or we’re not. One of the really powerful things we do is to empower people to make literary art, visual art.”

ItsAllAboutFamily-Issue6-image2Gray believes art helps shine a different light on life in poverty. Although the material can be shocking and gripping, artistic reflection manages to cross over class separation, racial segregation and religious speculation. It can actually deliver a message as vast and significant as the 36 million poor people who live in America, making people in poverty a lot harder to ignore.