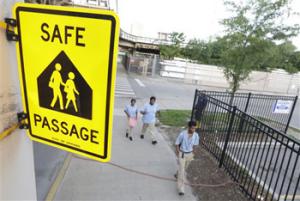 School Children walk a safe passage route along 63rd Street on the opening day of school this week, in Chicago. Chicago children returned to school walking past even more guards than last year, when concerns about safety prompted the city to line the streets with 1,200 adults every day. Photo Credit: The Associated Press, Spencer Green.

Chicago schools opened this week with more safety measures in place in hopes to reduce the incidents of violence that have been a problem year after year, and increasing in recent years. Daily, children and parents will make their way past security guards whose bright neon vests will serve as a reminder of the city's efforts to protect students from the violence that plagues its streets.

A year after hundreds more "Safe Passage" workers were hired to keep children from harm, an infusion of city money has allowed Chicago to increase the number of workers from 1,200 to 1,300. Another $10 million from the state will mean 600 more workers will be lining the streets within the next several weeks.

The city is also raising from 93 to 120 the number of schools with Safe Passage routes, said Jadine Chou, the chief safety and security officer for the Chicago Public Schools.

Parents welcomed the sight of the Safe Passage workers. "I like them on every corner, the police, too," said Shamika Bennett, who was walking her 5-year-old daughter, Dasia, to school, the girl sporting a new Dora the Explorer backpack and Nike shoes. "You feel a little safer."

The first day of school did not receive nearly as much media attention as last fall, when Mayor Rahm Emanuel's shuttering of some 50 schools before the school year began sparked concerns that some students would be at increased risk of violence because they were required to cross into rival gang territories.

The last school year ended, according to the school district, without a single student being seriously injured along any of the Safe Passage routes while guards were on duty in the nation's third-largest city.

At the same time, a number of factors this year - from troubling crime statistics to the upcoming mayor's race - will ensure that the program remains under a microscope.

School opened a day after the police department reported that the number of shooting incidents had climbed in the first eight months of the year compared to the same period last year. One mother said she worries that violence might erupt from the crowded street corners and bus stops she must negotiate to take her two young sons to school every day. 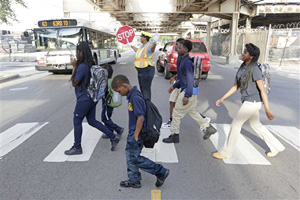 "There's no telling who's out there," said Keonya Wells on her way to a train that she will ride with them for more than 20 blocks to their school.

Similar concerns were voiced by Jeffery Currie, who was walking his 9-year-old son to nearby Dulles School of Excellence, almost exactly a year after officials at the school took the unusual step of responding to shootings in the area and a gang member's funeral by rushing students and staff off the property as soon as classes ended for five days.

"I make sure I walk him (because) I know about the streets, what happens," Currie said.

Some worry that the city is not doing enough to keep students from harm, particularly students who must leave for school early in the morning, well before the Safe Passage workers take their posts less than an hour before classes begin.

Last December, a 15-year-old girl who left her home before dawn to get to a school on the city's North Side was beaten and raped less than a half block from a Safe Passage route.

"She had to get to school earlier than the Safe Passage (workers) were on duty," said state Rep. LaShawn Ford, who said he will push to use some of the $10 million from the state to extend the guards' hours.

All this could pose a political risk for Emanuel, who is up for re-election next year. His most-talked-about potential rival, Chicago Teachers Union president Karen Lewis, has criticized Emanuel for closing neighborhood schools and dubbed him the "murder mayor" because of the city's violence.

Any violence that occurs on a student's walk to and from school could become fodder for Lewis - or any other opponent - to use against Emanuel, whose popularity has fallen over the last year.