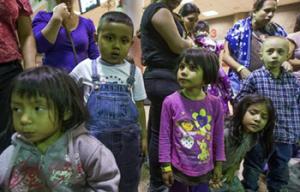 Congress makes attempt to address immigration issues, including migrant children, at our borders. But, it remains to be seen whether the bill will become law. Photo Credit: darkgovernment.com

Congress passed a measure to address the migrant children and youth arriving at the U.S. Mexico border, even though it may never become law, and passed a measure that would undo the status of work permits of immigrants working in the country illegally.

The House of Representatives, before leaving for recess, approved a $694 million bill to address the crisis of unaccompanied migrant youths arriving at the U.S.-Mexico border, but it stands no chance of becoming law. The Republican legislation passed 223-189, after the Senate left for a five-week summer break.

The bill would increase spending for the National Guard at the border and add immigration judges and detention facilities. It also would make policy changes so that the thousands of migrant children, most of them from Central America, could be sent home more quickly.

President Barack Obama condemned the Republican action and said he'd act unilaterally, as best he could.

Later Friday night, the House approved a companion measure that would shut down a program created by Obama that grants work permits to immigrants brought to the U.S. illegally as children. It also seemed designed to prevent the more than 700,000 people who've already gotten work permits under the program from renewing them, ultimately making them subject to deportation. 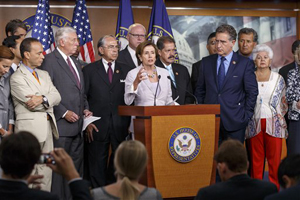 Three months before midterm elections, House Republicans were determined to show that they could take action to address the crisis involving tens of thousands of unaccompanied minors fleeing violence and poverty in Central America to cross illegally into Texas. More than 57,000 unaccompanied youths have arrived since October, mostly from El Salvador, Honduras, and Guatemala, plus tens of thousands more migrants traveling as families.

Conservative Republican lawmakers objected to sending any more money to Obama without a strong stance against his two-year-old deportation relief program, which Republicans blame for causing the current border crisis by creating the perception that once here, young migrants would be allowed to stay - a point the administration disputes.

The Republican plans met with protest from immigration advocates and Democrats, who warned Republicans that they'd be alienating Latino voters for years to come. Latino voters backed Obama in his 2012 re-election.

The new Republican border bill would pay for strapped border agencies only for the final two months of this budget year, falling far short of the $3.7 billion Obama initially requested to deal with the crisis into next year.