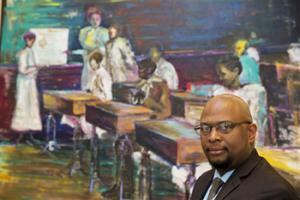 Kevin Gilbert, 42, of Ridgeland, Miss., a member-at-large on the National Education Association (NEA) executive committee and a former social studies teacher and coach, poses for a portrait in Washington on Thursday, May 1, 2014. Photo credit: AP Photo/Jacquelyn Martin

Public school teachers are overwhelming white, even in schools where non-whites make up the majority of students.

Almost half the students attending public schools are minorities, yet fewer than 1 in 5 of their teachers is nonwhite.

New studies from the Center for American Progress and the National Education Association are calling attention to this "diversity gap" at elementary and secondary schools in the United States. The groups want more to be done to help teachers more accurately mirror the students in their classrooms.

It becomes easier for students to believe "when they can look and see someone who looks just like them, that they can relate to," said Gilbert, a member of the NEA's executive committee. "Nothing can help motivate our students more than to see success standing right in front of them."

More than minority students would benefit from a more diverse teacher corps, said Ulrich Boser, the author of the center's report.

"Even in a place like North Dakota, where the students aren't particularly diverse relative to the rest of the country, it's important for our social fabric, for our sense as a nation, that students are engaging with people who think, talk and act differently than them but can also be just as effective at raising student achievement in the classroom," he said.

There were about 3.3 million teachers in American public elementary and secondary schools in 2012, according to a study by the National Center for Education Statistics. It said 82 percent were white, 8 percent were Hispanic, 7 percent were black and about 2 percent were Asian.

Students are a different story. In 1993, minority students made up 31 percent of the public school population; it was 41 percent in 2003.

The Center for American Progress' most recent statistics show 48 percent of the students in public schools are nonwhite – 23 percent Hispanic, 16 percent black and 5 percent Asian – and that percentage is expected to continue to increase. 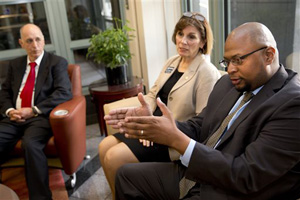 "We project that this fall, for the first time in American history, the majority of public school students in America will be nonwhite," Education Secretary Arne Duncan said last week.

"We have very few teachers of minority background yet we've gone to about 40 percent minority population," said Alderson, who was inducted into the National Teacher Hall of Fame this past week. "It's a beautiful blending, it's just teachers who don't have that cultural background, I think just that there are more issues."

Teaching used be one of the only professions African-American college graduates could aspire to and make decent money, said LaRuth Gray, scholar-in-residence at the Metropolitan Center for Research on Equity and the Transformation of Schools at New York University.

But as the county integrated and other professions opened their ranks, education lost its "cachet" and fewer African-American students thought about becoming teachers, she said.

"It's not seen as the ideal careers to have, and so therefore our youngsters, our black children tend to move in other directions," said Gray, who also serves as a government liaison for the National Alliance of Black School Educators.

It will take political will to change those numbers, advocates say. Most states already have programs and policies intended to increase the number of minority teachers, "but the yield of new teachers of color is disappointing," the NEA report said.