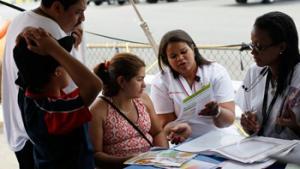 Hispanics still lack health care coverage despite the apparent success of the initial results of Obamacare, where the enrollment exceeded 8 million – far beyond the original target despite a less than stellar rollout.

Many Hispanics tried to get coverage but hit roadblocks, said Jane Delgado, president of the National Alliance for Hispanic Health, a nonpartisan advocacy network. The reasons are numerous: A Spanish version of the federal health care website was delayed and there was a shortage of in-person guides reaching out to Latinos.

For some mixed-status families, a fear of immigration authorities may have discouraged enrollment. Immigrants who are in the United States illegally cannot participate in the new health insurance system, but many have eligible relatives who are citizens or legal residents.

Younger and healthier than the U.S. population as a whole, Hispanics had been viewed as crucial to the success of Obama's coverage expansion. But the final count was disappointing. Hispanics account for 14.5 percent of those eligible for coverage on the new health insurance markets, but they represented 10.7 percent of the actual enrollees who also volunteered their race or ethnicity, the government reported.

"This is only the first step in a long race," Delgado said. "Many people who are uninsured don't understand the language of insurance. Big media campaigns aren't as effective for actual enrollment as the one-on-one approach."

The Health and Human Services Department said 8 million Americans chose a health plan through the new insurance markets in the first year of the historic health care overhaul. Some 4.8 million more gained coverage through Medicaid and children's insurance programs. A surge in enrollments since March 1 doubled sign-ups in some states, including Texas, Georgia and Florida. 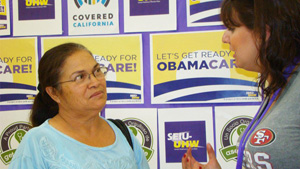 "There is reason to be optimistic about what the law can deliver, both in terms of coverage and affordable insurance options" said Andy Hyman of the nonpartisan Robert Wood Johnson Foundation. "In time, it will become part of the bloodstream of our health care system." Hyman is a senior program officer working to expand coverage.

Still, strong state-by-state performance indicates that the health care law is making inroads around the country, even as Republicans insist repealing "Obamacare" will be a winning issue in the fall congressional elections. An Associated Press analysis of the government numbers found that 31 states met or exceeded enrollment targets set by the administration before the insurance exchanges opened. Twenty of those are led by Republican governors, many of whom were hostile to the program.

"Beyond a doubt, the number of uninsured Americans has fallen by millions. Whether it's 5 million or 15 million still isn't clear," said Larry Levitt, an expert on health insurance markets at the nonpartisan Kaiser Family Foundation. "The low enrollment among Latinos is an indication of where challenges still lie: the hard-to-reach groups where more outreach is probably needed."

Many of the underperforming states were those that had built their own online marketplaces. Massachusetts, which had served as a model for the Obama program, only signed up 31,695 people, far short of the goal of 250,000. Oregon, which met only 29 percent of its goal, recently decided to scrap its online marketplace and go with the federal portal.

The next enrollment period for private health insurance coverage for 2015 under the health law is scheduled to run Nov. 15 through Feb. 15.

"They've had some success," Levitt said, "but they're going to have to do it all over again next year and get more people signed up to succeed."