Hate Crimes Are An Affront To Us All 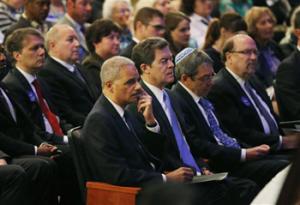 Hate crimes are an affront to us all as Americans and to this nation, declared Attorney General Eric Holder, as he noted America stands with the mourners of three people killed at Jewish community sites in suburban Kansas City.

Before an overflow crowd of about 1,300, Holder joined Kansas Gov. Sam Brownback and several religious and political leaders at an interfaith memorial service at the Jewish Community Center, the site of one of two shootings that stunned the city on the eve of Passover.

Avowed white supremacist Frazier Glenn Cross, 73, is charged with the killings Sunday of Dr. William Lewis Corporon and his 14-year-old grandson, Reat Griffin Underwood, outside the Jewish Community Center of Greater Kansas City. Cross shouted "heil Hitler" at television cameras as he was arrested after the shootings.

Cross, a one-time government informer, is also accused of killing Terri LaManno at a nearby Jewish retirement complex shortly after the shootings at the Jewish Community Center. Her funeral was scheduled for Thursday. All three victims were Christian.

"Every alleged hate crime, no matter who the intended target, is an affront to who we are ... both as a country and as people. These acts cannot be ignored," Holder said.

"Although our hearts are truly broken, all Americans stand with the people of Overland Park, of Leawood, and of Kansas City. We are united in our condemnation of this heinous attack and our commitment to see that justice is served," he said.

Federal prosecutors say there's enough evidence to warrant putting the case before a grand jury as a hate crime, but U.S. Attorney Barry Grissom, who attended the service, said Tuesday that federal charges were likely a week or more away.

A federal prosecution of Cross in Kansas would come nearly three decades after the U.S Justice Department arranged to temporarily support Cross and his family as part of the government's witness protection program.

Cross, who is also known as Frazier Glenn Miller, served three years in federal prison in the late 1980s, convicted on weapons charges and for threatening a race war. He avoided a longer sentence in exchange for testifying against more than a dozen other white supremacists, including members of a group known as The Order, accused of plotting to overthrow the federal government. Despite his testimony - an act viewed by his peers as traitorous- each of the 14 defendants in the Fort Smith, Ark., trial was acquitted. 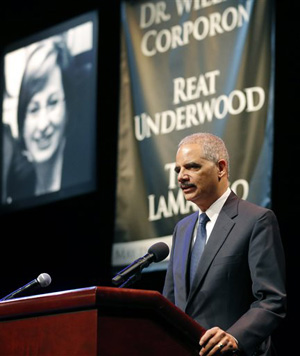 In his 1999 memoir, "A White Man Speaks Out," Cross recounted how he enthusiastically accepted the government's help after being told he could face up to 200 years in prison.

"I was to plead guilty to one count of felony possession of a hand grenade and answer all questions posed to me by the authorities. In return, they would recommend a 5-year prison sentence, immunity from any further prosecution by either state or federal authorities, and entrance into the federal witness protection program which included the financial support of my family while I served my sentence."

A five-year sentence sounded a little more palatable than 200, so I accepted." Federal officials have declined to discuss any participation by Cross in the protection program.

Groups that monitor hate groups said they are confident Cross received federal witness protection. They cite the fact that he was issued a new Social Security number in Nevada in 1990, the year he was released from prison. Public records show both names and Social Security numbers linked to his address in Aurora, Mo.

Jeff Lanza, a retired special agent in the FBI's Kansas City office, said such deals are not uncommon when building cases against secretive criminal organizations. "It's a trade-off," he said. "You usually try to find someone with the least culpability, the least guilt, who has some broader insight into the larger criminal enterprise," he said. "And you cut that person a deal."

Cross now faces a state charge of capital murder for the deaths of Corporon and Underwood and a count of first-degree premeditated murder for LaManno's death.

Corporon and Underwood were at the JCC for the "KC Superstar" competition, an American Idol-like singing contest for students. LaManno worked as an occupational therapist at the Children's Center for the Visually Impaired.

Mindy Corporon, William Corporon's daughter and Reat Underwood's mother, did not attend the service because she felt it too soon to return to the community center, said Rev. Adam Hamilton, the family's minister.

Rabbi Arthur P. Nemitoff of Congregation of B'nai Jehudah told those at the service to love their neighbors as the victims would.

"We need to love life, love faith, love people, for that is as I have read and heard who William and Reat and Terri were," he said. "All lovers of life."