Achievement Gap Wide Between White and Minorities in Wisconsin 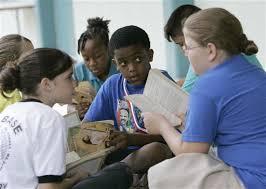 Test results for students participating in the taxpayer-subsidized private school voucher program were to be released later Tuesday.

The scores are looked at closely by parents, educators and policy makers to assess both how well students are learning and how schools are doing at educating them. Last year, the report showed voucher school students lagging their public school counterparts, a finding that only further fueled the rancorous debate in the Legislature over expanding the program.

Ultimately, the Legislature and Gov. Scott Walker reached an agreement to allow vouchers in 25 additional schools or school systems, with a 500-student cap beyond Milwaukee and Racine. The first results for those 500 students are coming out Tuesday. That cap grows to 1,000 students next year, and advocates plan to push for even greater expansion. 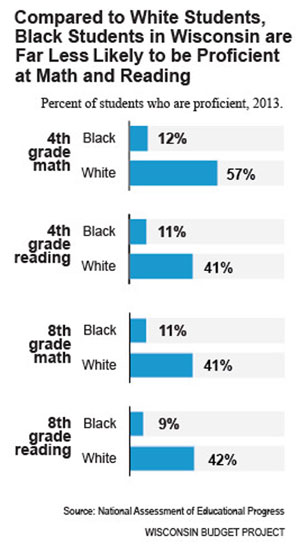 The scores were up slightly from last year, when 48.1 percent of students were proficient or advanced in math, and 36.2 percent were in reading.

As has been the case for years, minority students continue to lag. American Indian, black and Hispanic students all had fewer proficient or advanced math scores. In reading, all minority groups, including Asian students, scored lower than their white counterparts.

"Our achievement gaps are no secret and are too large," state Superintendent Tony Evers said in a statement.

A task force Evers created to study the issue plans to meet for the first time Wednesday.

The tests show that over 42 percent of Wisconsin students are in poverty. That is a 5 percentage point increase over the past five years. While just over 30 percent of white students are eligible for free or reduced lunch, nearly 82 percent of black students qualify, along with nearly 78 percent of Hispanic students and more than 68 percent of American Indians.

The results reported Tuesday are the last under the Wisconsin Knowledge and Concepts Examinations, which have been used to assess student achievement since 1992. Those tests are being replaced next school year with new annual online exams, and another component that can measure progress throughout the year instead of just one point in time.

Every high school junior in Wisconsin will also take the ACT college entrance exam, with the state picking up the $50 fee. All 11th graders will also take another test designed to assess job skills called WorkKeys. Students in elementary grades would take a new test being designed by a 28-state consortium that includes Wisconsin.

The tests are aligned with the Common Core education standards.

Evers, who advocated for the new tests, said they will help the Department of Public Instruction close achievement gaps and prepare students to graduate ready for college or a career.

Nearly all of the state's 430,600 students in grades three through eight and 10 took the reading and math tests last fall.

I am kinda getting the hint that most school needs to find some improvements or parents need to. On this website there have been a lot of articles about how minorities are behind the white students and how they aren't getting getting better. So I think it is time to put something in place where this can stop happening. This will not is self in one year of school but it can be better. Teachers need to notice which students are not succeeding and help them out. If the teacher can't help the students because the number of students in classes then maybe there needs to be multiple teachers in the classroom or a place where the student could go to get that extra help. Parents also need to step up and take control of their childs learning. They can ask the teacher what they should be doing or even help the child with their homework or extra work that they come up with. This problem will only get fixed if both ends are willing to make a change. The actual school and the parents.