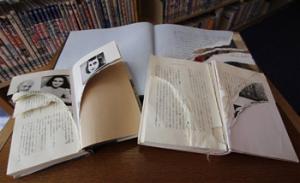 Ripped copies of Anne Frank's "Diary of a Young Girl" and related books are shown at Shinjuku City Library in Tokyo Friday, Feb. 21, 2014. Tokyo Libraries said on Friday that hundreds of copies of Anne Frank's diary and related books have been found vandalized across the city's libraries in the last month, sparking fears of an anti-Semitic motive. Photo Credit: The Associated Press, Koji Ueda

Anne Frank's "The Diary of a Young Girl" and scores of books about the young Holocaust victim have been vandalized in Tokyo public libraries since earlier this year. Is this indicative of growing anti-Semitism in Japan as in parts of Europe?

The damage was mostly in the form of dozens of ripped pages in the books. Librarians have counted at least 265 damaged books at 31 municipal libraries since the end of January.

Japan and Nazi Germany were allies in World War II, and though Holocaust denial has occurred in Japan at times, the motive for damaging the Anne Frank books is unclear. Police are investigating.

The league's national director, Abraham Foxman, called for a full investigation and asked Japan's government " to carefully consider if this act of disrespect for the memory of the millions of Jewish victims who lost their lives in the Holocaust requires a new look at educational initiatives regarding the Holocaust and anti-Semitism." 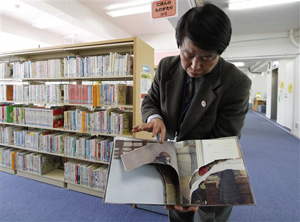 He said that while there has been some history of "journalistic and literary anti-Semitism in Japan, these kinds of incidents are in fact quite rare."

In the Nakano district libraries, the vandals apparently damaged the books while unnoticed inside reading rooms, according to city official Mitsujiro Ikeda. "Books related to Ms. Anne Frank are clearly targeted, and it's happening across Tokyo," he said Friday. "It's outrageous."

At another library, all the books that were damaged could have been found using the keywords "Anne Frank" in an online database.

At least one library has moved Anne Frank-related books behind the counter for protection, though they can still be checked out.

Anne Frank wrote her diary over the two years she and her family hid in a concealed apartment in Nazi-occupied Netherlands during World War II. After her family was betrayed and deported, she died in a German concentration camp at age 15 in 1945.

Her father survived and published her diary, which has become the most widely read document to emerge from the Holocaust.

The Simon Wiesenthal Center, a U.S.-based Jewish human rights organization, issued a statement calling the vandalism a hate campaign and urging authorities to step up efforts to find those responsible.

That is very disrespectful. Those people need to be caught and punished. There is nothing right about it even if you do not agree with what it is about. She was Jewish and that is the only reason they are doing that and it is not right.

I believe that the circumstances and the vandalism are purely because of hate towards another race. However, aside from Anne Frank, I am glad that this website is branching out from racial topics centering around blacks. Racism is affects more than the black population or even just minority population. In fact, racism affects everyone and if we want to see changes and steps toward equality, we need to focus on more than one racial group.

Focusing on just one racial group is not how we are going to fix the problem of racism. Racism does affect everyone and to get the point across that it does affect everyone we need to not just focus on the black population but all those racial groups that have experienced racism. These people that are destroying these books needs to be caught because it just isn't right. First off those books are apart of a library and it is vandalism and secondly I feel it is hate toward another race. This person or people need to be caught and have a punishment.

of course it is racism, especially since it is such an important piece of history.