A study has revealed that college bowl teams are graduating white players at a significantly higher percentage than African-American players.

The average graduation success rate for African-American football players at the schools participating in college bowl games is 65 percent compared to 84 percent for whites, according to the annual report released by The Institute for Diversity and Ethics in Sport (TIDES) at the University of Central Florida.

Richard Lapchick, principal author of the study and director of TIDES, said that the disparity largely a reflection of the lack of quality education African-American players are receiving as adolescents.

Lapchick said the lack of quality education in primary and secondary level school systems is a major part of the problem. "They get behind and it makes it tough for them to catch up in college," he said.

Also, 23 percent of this year's bowl schools also had graduation success rates (GSRs) for African-America players that were at least 30 percentage points lower than their white counterparts.

Only Boise State and Rice had overall GSRs for football players that were better overall compared to student-athletes overall.

Rice and Boston College led the way overall in terms of graduation rates, according to the study. 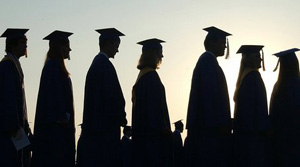 The GSR measures graduation rates of Division I schools after four years and includes students transferring into the institutions. The GSR also allows schools to subtract athletes who leave before graduation, as long as they would have been academically eligible to compete if they remained.

According to the study, TIDES reviewed the six-year graduation rates of each school's freshman class that enrolled in 2006-07, and then calculated a four-class average from 2003-07.

In terms of the NCAA's Academic Progress Rate (APR), the study found that 97 percent of the bowl-bound schools received scores of 925 or higher. Louisville was the only bowl-bound team with an APR below 925.

The Atlantic Coast conference had five schools in the top 15 in APR, while the Big 10, Southeastern Conference and American Athletic Conference each had two schools.