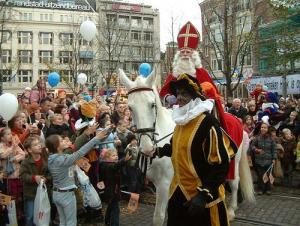 Black Petes are part of the Netherlands’ Sinterklaas children’s festival and the U.N. Human Rights Commission has condemned it as being racist. Photo Credit: thesocietypages.org

The fastest growing Dutch language Facebook page received one million 'likes' in one day. However, this page represents one side of a growing controversy surrounding the tradition of Black Pete. While the page in question supports the role that Black Petes play in Sinterklaas children's festivals, many are calling the clowns in blackface racist.

The mushrooming popularity of the "Pete-ition" page reflects the depth of emotional attachment most Dutch people feel to a tradition that seems suddenly under threat, and their annoyance at outsiders who call it racist without understanding it.

On Tuesday the chairwoman of a U.N. Human Rights Commission panel investigating whether the festival has racist elements condemned it flatly.

"The working group does not understand why it is that people in the Netherlands cannot see that this is a throwback to slavery, and that in the 21st century this practice should stop," Verene Shepherd told television program EenVandaag.

In the festival's story as it is told to children, Sinterklaas, also known as St. Nicholas, arrives by steamboat in mid-November accompanied by a horde of helpers: "Zwarte Pieten," or Black Petes, who have black faces, red lips and curly hair.

Opponents of the tradition say Pete, referred to in song as a "servant" to the elderly saint, is an offensive caricature of black people. Supporters say Pete is a positive figure of fun whose appearance is harmless. Children are usually told he has become black from going down chimneys.

A public broadcaster produces a daily fictional news program about the doings of Sinterklaas and the Petes that is shown in public elementary schools for several weeks. 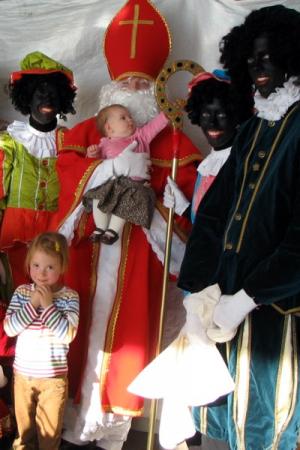 Children put out shoes at night to receive small presents or sweets. On the evening of Dec. 5, families read poems and exchange presents. The Dutch-Belgian festival is one of the main sources of the Santa Claus traditions widely celebrated on Christmas.

Discussion about Zwarte Piet has escalated since 2011, when one prominent opponent, Quinsy Gario, was thrown to the ground, handcuffed by police and dragged away for wearing a t-shirt with the text "Black Pete is Racism" where children might see.

Amsterdam's mayor this month responded to multiple complaints asking he not grant a license for the public celebration of the arrival of Sinterklaas in Amsterdam. Eberhard van der Laan said he was willing to think about ways in which Pete's image could be adapted, though it would have to be done gradually.

Organizing committees for the festival and the children's broadcaster followed suit, saying they would also consider changes – if people want them.

On Tuesday the man who has played the part of "Head Pete" on the Sinterklaas news program for more than a decade became the latest public figure to speak out, writing an editorial titled "make me less black and less a servant."

Others to question the tradition include Victoria's Secret model Doutzen Kroes, and a number of the country's prominent thinkers, including nearly all black celebrities.

But the overwhelming majority of Dutch people don't want change.

"Message for the U.N.: isn't there a war somewhere, starvation or genocide going on that you could better be concerned about?" Dutchman Peter Udo wrote in a comment on the Facebook page. That comment has received more than 2,000 likes.

Asked about the issue, Prime Minister Mark Rutte said it isn't his place to judge a folk tradition, adding "Black Pete just is black, I can't change that."