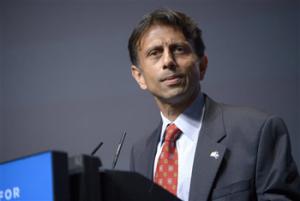 Louisiana Gov. Bobby Jindal is demanding that federal officials abandon their challenge of his state's voucher system, accusing the Justice Department of being more interested in doing favors for teacher unions than helping students.

In an appearance blocks from the Justice Department that was just as much about politics as policy, Jindal said President Barack Obama and Attorney General Eric Holder would not send their children to failing schools but are fighting against a program that helps students from low-income families attend better schools. Jindal, a Republican considering a 2016 presidential bid, said Obama and Holder are denying students in his state the same opportunities their own children enjoy.

"Our children only grow up once. They only get one chance to get a good education," Jindal said.

Louisiana's school voucher program has become a political flashpoint, with congressional Republicans this week joining critics of the Justice Department's lawsuit, which seeks to block Louisiana from issuing new tuition vouchers in some districts still under desegregation orders. Former Florida Gov. Jeb Bush, a Republican who has championed education reform efforts, joined Jindal in demanding the Justice Department back down.

"This is purely political," said Bush, the son or brother to two U.S. presidents who is being urged to run in 2016. "I have no idea why they made this decision."

About 8,000 Louisiana students are attending private or parochial schools through the voucher program, costing the state an estimated $45 million this budget year. The program allows children from low-income families in school districts graded C, D or F to use public money to attend private schools.

But the program runs up against decades-old desegregation efforts. Louisiana has 70 school districts, and 34 remain under desegregation court orders.

"They are using those laws to trap these children in failing schools," Jindal said. 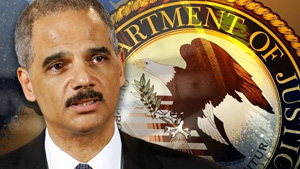 The Justice Department said Louisiana has given vouchers this school year to students in at least 22 districts remaining under desegregation orders. In papers filed in U.S. District Court in New Orleans, the Justice Department said Louisiana distributed vouchers in 2012-13 to almost 600 public school students in districts that are still under such orders, and "many of those vouchers impeded the desegregation process."

The department is asking the court, starting with the 2014-15 school year, to permanently block the state from awarding vouchers in districts that are under desegregation orders unless those districts seek court approval.

In arguing that the voucher program had hurt desegregation efforts, the Justice Department cited an example of Independence Elementary School in Tangipahoa Parish. It said the school lost five white students because of the voucher program, "reinforcing the racial identity of the school as a black school."

The lawsuit also said Celilia Primary School in St. Martin Parish School District is a majority-white school in a majority-black district, and it lost six black students because of vouchers, "reinforcing the school's racial identity as a white school."

Bush said those small changes in student populations are laughable as evidence of re-segregation. "The data doesn't show that at all," Bush said.

Jindal said the lawsuit is ridiculous and leaves students trapped in failing schools. "There's not a chance that the president or the attorney general would send their kids to these schools," Jindal said. The only explanation, Jindal suggested, was to win favor from teacher unions, which backed Obama's re-election bid. "This may be because this administration is completely following the dictates of the government unions," Jindal said.