The use of vouchers is designed to assist with school choice to allow students to attend better performing schools. The challenge in administering voucher programs is that they do not discriminate against poor and minority students who are often attending poor performing schools. Photo Credit: sistertoldjah.com

House Speaker John Boehner and other Republican congressional leaders show their support for the use of vouchers for private schools when they urged the Justice Department on Tuesday to end efforts that could block Louisiana from issuing new private school tuition vouchers in some districts.

The department filed a motion last month in federal court saying new vouchers should not be issued in districts under longstanding federal desegregation orders unless - and until - they are approved by a federal court. The filings say 34 school districts in Louisiana remain under desegregation orders stemming from civil-rights-era lawsuits, and that vouchers have been issued in at least 22 of them.

The letter says the department's move could force students to stay in failing public schools and pressure other states to abandon similar initiatives.

Congressional Republicans are also seeking an explanation from Attorney General Eric Holder on why he believes the attempt will aid students, "particularly low income and minority children." They ask for detailed information on correspondence on the issue between Holder's department and the Obama administration, and on correspondence and meetings that Justice officials had with "outside groups" on the voucher issue.

The department said in an emailed statement that the letter had not been received Tuesday afternoon. 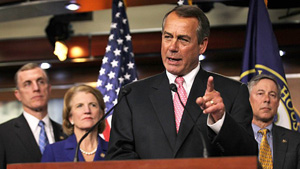 The voucher program provides state-funded private school tuition for some students who are from low- to moderate-income families and who are assigned to low-performing public schools - schools graded with an F, D or C under the state accountability system.

Piloted in New Orleans in 2008, the program was expanded statewide as part of a broad overhaul of education policy pushed through the Legislature last year by Gov. Bobby Jindal, a Republican. An estimated 8,000 students are using vouchers to attend private schools this year.

Jindal's office said Tuesday that 90 percent of the students in the voucher program are minorities.

Jindal, former Fla. Gov. Jeb Bush and Sen. Tim Scott, R-S.C., are to discuss the issue at the National Press Club in Washington on Wednesday, according to Jindal's office.

"We appreciate the support of the House Leadership," Jindal said in a news release. "They are exactly right about the Obama Administration's backwards lawsuit that is only an attempt to curry favor with government unions and deny children an equal opportunity to get a great education."

The department's statement said its actions are "fully consistent with the Louisiana law that established the voucher program, which provides that the program is 'subject to any court-ordered desegregation plan in effect for the school system in which the public school is located.'"