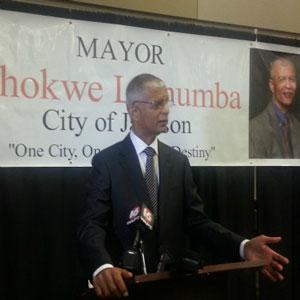 While saying he wants Jackson to become a destination city that people want to move to, Lumumba warned about the potential downsides of gentrification. "But this administration rejects, get it clear now, quote it, rejects gentrification. Gentrification is nothing but a war on the people who live in the city already.” Photo Credit: Jeffrey Hess/MPB News

JACKSON, Miss. (AP) - A one-time black nationalist was inaugurated as mayor of Mississippi's capital city Monday, saying he wants Jackson to be a unified community where people of diverse backgrounds, including all racial and ethnic groups can earn a living.

Chokwe Lumumba (SHOW-kway Lu-MOOM-bah) said developers who do business in the city need to work with contractors and subcontractors who live in Jackson. The city has a majority-black population and most of its office-holders are African-American, but its economic power structure has traditionally been white.

Lumumba said he will resist the type of development that would drive up the cost of living.

"Gentrification is nothing but a war on the people who live in the city already," said Lumumba, who was involved in a black nationalist group, the Republic of New Afrika in the 1970s and '80s, serving for a time as its vice president.

More than 27 percent of Jackson residents live below the poverty level, and the city has hundreds of dilapidated or abandoned homes. The new mayor said he wants Jackson to attract new residents. "The aim is prosperity and security for every one of us," he said.

Lumumba, 65, is an attorney and served the past four years on the seven-member Jackson City Council. During the Democratic primary in May, he unseated Harvey Johnson Jr., who was mayor 12 of the past 16 years. Lumumba won the June 4 general election by a wide margin over three low-budget independent candidates. Johnson was Jackson's first black mayor, and Lumumba is the third.

Jackson is Mississippi's largest city, though its population has dropped significantly in the past two decades as people moved to the more affluent suburbs. The Census Bureau estimates the Jackson population at 175,561 in 2011, 79 percent black, and 18 percent white.

A diverse group of more than 2,000 people attended Lumumba's inauguration at the Jackson Convention Complex, an angular contemporary structure that opened in 2009. It's just two blocks west of the white-columned City Hall, built by slave labor between 1846-47, and used as a Civil War hospital for both Union and Confederate troops.

"Mayor Lumumba. I like the ring of that name," Myrlie Evers-Williams, the widow of slain civil rights leader Medgar Evers, told the crowd. A white segregationist murdered Medgar Evers 50 years ago last month, outside his Jackson home.

The new mayor said Evers "gave his life for freedom, justice, and equality. We think of Medgar and the other martyrs of Mississippi who lived their lives and lost their lives so that we may be exactly where we are today," Lumumba said. "Most of us here are part of a long effort, a tremendous story of glory, of horrible suffering, of tragedy, of struggle, and of courage. And it is precisely this story which brings us here today."

Lumumba, born in Detroit as Edwin Taliaferro, changed his name in 1969, when he was in his early 20s. He said he took his new first name from an African tribe that resisted slavery centuries ago and his last name from African independence leader Patrice Lumumba. He moved to Jackson in 1971 as a human rights activist. He went to law school in Michigan in the mid-1970s and returned to Jackson in 1988. 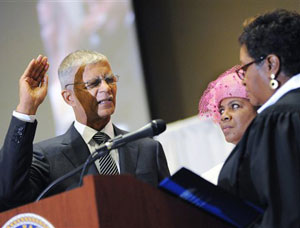 During the mayoral campaign this year, Lumumba said people should not be concerned about his involvement in the Republic of New Afrika, which advocated reparations for slavery and "an independent predominantly black government" in the southeastern United States. He said Monday that he has heard people say that he is "too radical" and "too militant."

"If you get to know me, I'm a pretty nice guy," he said, adding that he wants the city to move forward with a brand of love that is not "vindictive."

"God has really blessed us with a history that makes us understand when things are wrong," Lumumba said.

U.S. Rep. Bennie Thompson, a Democrat who's the only black member of Mississippi's current congressional delegation, said that since Lumumba's election in June, people have told him they're anxious about Jackson's future. "If you heard the speech," Thompson said, "then your anxiety should be no more."