Mi CASA es Su Casa (My House Is Your House) 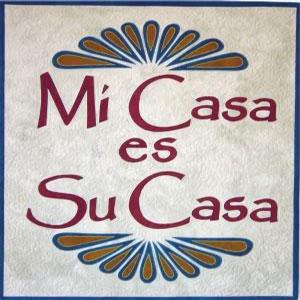 Which means, “my house is your house” and is a way to welcome guests into the homes of many Hispanic families. Photo Credit: mymedialabs.com

According to a 2010 Associated Press article, “Blacks struggle with a 72 percent unwed mothers rate,” Women’s health on NBCNews.com, statistics reveal that children of unmarried mothers of any race are less likely to succeed academically, and more likely to be imprisoned, and the victim of drugs, poverty, and continuing the out-of-wedlock cycle than children born into two-parent homes. Not many of those unmarried mothers move beyond welfare to self- and other-sustaining lives. LaShunda Leslie-Smith is one who has.

She describes her journey from teen motherhood to her position as Executive Director of CASA, (Court-Appointed Special Advocates.) “My journey hasn’t been an easy one,” she acknowledges, “but it certainly hasn’t been the worse. There are many teen mothers who give birth under horrible circumstances, pregnancies that occur within the context of sexual abuse and broken families.”

“For the most part,” she reflects, “I had a very supportive family. Without them I don’t think I would have found this much success. I was taught that education was important, I witnessed a strong work ethic, and most importantly when I had my child, my mother insisted that I would be mom and she would only serve in the role of grandmother.”

Her mother’s pronouncement forced Leslie-Smith, “to grow up and take responsibility for my actions. At some point in my high school career, I decided that if I was ever going to make the argument to my son that education was important, I would have to demonstrate that by completing school myself. And so I did. I had no intentions of going to college, but God had a different plan for me,” she shares. “I was able to graduate from high school on time, go straight to undergraduate school, and from there I attended graduate school. I am proud to say that I made it and even more proud of my son who is now a freshman in college.”

Apart from her work with CASA in Rochester, New York, Leslie-Smith has collaborated on two books. “The first book is, A Letter To My Mother: A Daughter’s Perspective. The second is called, The Journey of a Teenage Mother. Twelve women gathered, again from all over the globe, to share their stories of struggle, hope, and success as former teenage mothers. This book is meant to serve as hope for young mothers who are currently struggling. It is also a good book for teens to read so they don’t make the same mistakes that we made as teens.” This book is due to be released in early October.

Long before her current advocacy work, Leslie-Smith was the role model so needed in the lives of children, especially children who stand in harm’s way. Her life work parallels the debt of which Nelson Mandela speaks: “We owe our children, the most vulnerable citizens in our society, a life free of violence and fear.”