Fourth Of July Celebrations Around The Country 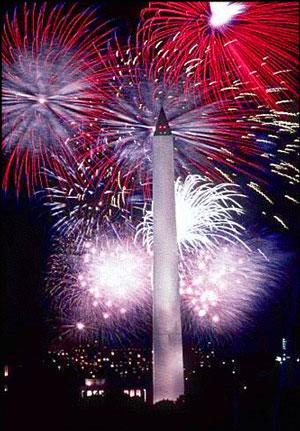 Fireworks, parades, parties and great food make up many Fourth of July celebrations.

While the Fourth of July means just one thing in America, Independence Day (and of course it’s a Federal Holiday too), there are a plethora of different ways the day is celebrated by the many cultures who call the United States home.

Fireworks, parades, barbecues, carnivals, fairs, picnics, concerts, baseball games, and political speeches usually accompany Fourth of July celebrations. In fact, some of the traditions still held in various cities around the United States date back 100 years to when the country really was a young and struggling nation.

For example, since 1785, the Bristol Fourth of July Parade in Bristol, Rhode Island is the oldest Independence Day celebration in the United States. An event that continues today is the annual 10-kilometer Peachtree Road Race, which began in Atlanta, Georgia in 1970. Another long-standing celebration that began in 1959 is the International Freedom Festival jointly held in Detroit, Michigan and Windsor, Ontario during the last week of June, and still held every year as a mutual celebration of Independence Day and Canada Day on July 1. Since 1973, the Boston Pops Orchestra continues to provide folks with a music and fireworks show over the Charles River Esplanade called the "Boston Pops Fireworks Spectacular," and in Washington D.C. the Capitol lawn holds an annual celebration with a free concert and fireworks.

How do other cultures in the United States celebrate the holiday?

In 1912, the Danish Americans belonging to the Rebild Society began holding an annual celebration, and as a Danish-American friendship organization, the group holds an annual Fourth of July weekend festival, which also serves as a homecoming for Danish-Americans in the Rebild section of Denmark.

And since 1916, a Nathan's Hot Dog Eating Contest has been held in Coney Island in Brooklyn. The contest began in celebration of the Fourth as a way for a group of four immigrants to settle a dispute as to who was the most patriotic that year.

Fact Monster lists a number of interesting Fourth of July celebrations around the country, ranging from an American Indian rodeo and three-day Pow-Wow in Flagstaff, Ariz., to a candle festival in Lititz, Penn., where hundreds of candles float in water and the townspeople choose a "Queen of Candles" each year.

The website 1 America,  adds to that list by including the Exchange Club’s Ribfest in Naperville, Ill., the LibertyFest held in Edmond, Okla., and an “only in Texas” type of event, the annual USA Independence Day parade in Arlington, Texas with a theme of "Let's Roll . . . America."

Although most Americans will celebrate the day with a parade and party, some races and ethnicities may not feel as strongly about it with the ongoing controversy over immigration, and the fact that African-Americans were not amongst those termed as a freed people during the signing of the Declaration of Independence on July 4, 1776. One Texas resident noted that June 19, better known as “Juneteenth,” is the African-American Independence Day, not the Fourth of July. Juneteenth is a celebration that dates back to 1865, when two-and-a-half years after the Emancipation Proclamation Union soldiers finally arrived in Texas to announce the war had ended.

Hispanic cultures include a variety of celebrations since folks from Mexico also try to remember their Independence Day on September 15. And many Hispanic Americans enjoy the fireworks and parties in July, but instead of hotdogs, there is usually a smorgasbord of Mexican foods served.

But regardless of our race, ethnicity or culture, we are all Americans!