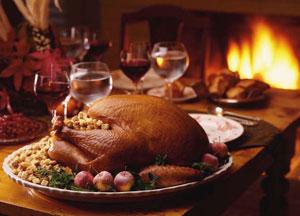 As November began, Americans everywhere started planning for the annual Thanksgiving celebration November 25. As you begin preparing for the holiday, how much do you really know
about both the history and the tradition of this celebration?

In 1941, President Roosevelt declared the fourth Thursday of November as Thanksgiving Day. Some will point out that the pilgrims never actually observed an annual Thanksgiving feast in autumn, except in 1621, but most Thanksgiving celebrations consisted of more prayer, and fasting, then eating.

Lest you think America is the only country that celebrates a day of Thanksgiving, our closest neighbor, Canada, celebrates such a day annually on the second Monday in October, when they give thanks for the end of harvest season, which relates to the European harvest festivals. It was on January 31, 1957 that the Canadian Parliament proclaimed a day of general thanksgiving for the country, and they first celebrated it in 1959.

European in nature, American traditions are now a part of the Canadian holiday, such as parades taking center stage, football, and a day of feasting.

Regarding tradition, in America today, although we continue to give thanks during this annual holiday, over the years we began to include a few other things into our traditions.

Thanksgiving games began in 1934 with the AFL Detroit Lions, although no games occurred during World War II. As for the NFL, the Dallas Cowboys began hosting Thanksgiving games in 1966, with the exception of two years in the 1970s. Much of this football tradition predates the official declaration of Thanksgiving Day, since it includes the first intercollegiate football championship held on in 1876.

So, when all is said and done, and your Thanksgiving traditions are fulfilled, there is one other important tradition; remember to give thanks for all the blessings you received throughout the year. After all, the Thanksgiving holiday really is about a time of unlimited thanksgiving.

Thanksgiving is a wonderful holiday filled with joy and love from family members.The football game is a world wide event when it comes to Thanksgiving because every year me and my family always watch the game where ever we might be. My family and I are also a part of the 95 % that eat and enjoy turkey. I can not think about Thanksgiving without thinking about turkey and football.

Thanksgiving in itself almost means tradition. The turkey, the cranberry sauce, the football; all are a tradition year in and year out. We tend to forget that this tradition doesn't date back to the pilgrims. Thanksgiving wasn't made a holiday until the early 1930's, and even then, it was more for economic reasons that it became a holiday rather than the recognition of our country and blessings. Nonetheless, I am glad that the traditions are what they are, but it's also good to branch out. My family, the last few years, have decided to have a non-traditional Thanksgivings full of BBQ, ribs, sausage, coleslaw, the whole Texas country fixins'. I love it because it's not the same old turkey, yet we still all gather around the TV for a good ole football game and we still laugh and joke around. Thanksgiving is about fellowship and remembering just how truly blessed we are.