Flying Solo: How "The Village" Aids Single Parents In Raising Children Regardless Of Race And Ethnicity 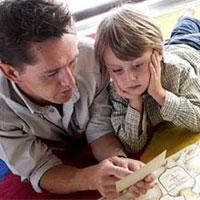 Ten-year-old Solomon Wells has only met his dad one time. Their brief visit was two years ago at his dad’s home in Hawaii. “He’s proud of my soccer games, and really likes it when I send him pictures,” Solomon says. “Sometimes we use email.”

Solomon lives in Montana with his mother Laurie, and half-brother Eric, who is seven. This morning, I am calling Laurie, a friend, to ask about interviewing her for this article. After chatting with me briefly, Solomon hands the phone to his Mom.

“Really, this is a good time to talk a while,” Laurie assures me, as I hear the boys bustling around her, and the dog barking. “They need to get ready for school without my help.”

She pauses to praise Eric for having his backpack ready by the door, and remind Solomon to bring his soccer shoes.

“Being the only parent feels like a heavy burden, sometimes,” Laurie says. "But I wouldn't trade this for anything. My kids and I share so much love and joy."

Do children from two-parent households become more successful in life than those raised by a single parent? Not so, says Ohio State University (OSU) researcher, Claire Kamp Dush.

The study shows that children in stable single-parent homes fare as well as those in married households, in terms of academic abilities and behavior problems.

"Success, for many children is nurtured in a well-balanced household, whether they have one or both parents in the home," says Kamp Dush, Assistant Professor of Human Development, and Family Science at OSU.

The study findings appear in "Marriage and Family: Perspectives and Complexities," a book co-edited by Kamp Dush and H. Elizabeth Peters, Professor of Policy Analysis and Management at Cornell University.

In the United States, 32 percent of children under age 18 are living in single-parent homes.

The federal government promotes "healthy" marriage for single mothers, under its Temporary Assistance for Needy Families (TANF) program that replaced welfare in 1996.

However, Kamp Dush says, "A new marriage or partnership may not be good for the children of single mothers, especially if it’s short-lived or very stressful. Family transitions are hard for kids.”

Single-parent families are at greater risk of economic hardship than two-parent families – largely because the latter have twice the earning potential. However, research shows that marriage does not guarantee economic security either.

In rural and suburban areas, the majority of low-income children have married parents, according to the National Center for Children in Poverty (NCCP).

Laurie works part-time, and gets some child support from Eric’s father. She chooses not to enroll in the TANF program. 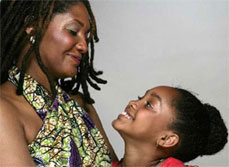 “Financially, with two parents at home it could be easier, but I don’t feel pressured to have a new partner,” she says. “At this stage in the boys’ lives, it might be cumbersome to add another authority figure with their own set of ideas on parenting.”

“But, thankfully, we have good male role models, who really care about the boys,” Laurie says.

Single parent families need other caring adults in their lives on a regular basis, according to Marge Kennedy and Janet Spencer-King, single mothers and co-authors of The Single Parent Family: Living Happily In A Changing World.

“Bringing appropriate adult relationships into your children’s lives will expand your and the children’s emotional network,” they write.

Solomon has bonded well with two men – his soccer coach, and a fellow church member. In addition, Eric loves his friend’s dad; they often walk the dogs and play ball games together.

Patrick Batchelder writes about single parenting on the website, www.fathers.com. “Don’t try to be a mom,” he advises his peers.

A single father of two children, Batchelder recalls a walk he and his daughter took when she was four-years-old. “We found a glorious mud puddle and started tossing rocks into it … pretty soon we were into it ourselves, and covered with mud. Along came a mom. She was horrified. When I pointed out that kids were ‘wash and wear’, she got a blank look on her face.”

“Dads are different, and kids love it,” he declares.

“Be a man, be a father, get muddy, and let the laundry pile up,” Batchelder writes on his website. “Most of all ignore the stereotypes that tell you what to be.”

Kennedy and Spencer-King echo his sentiment, encouraging parents to let children be themselves, rather than “replicas of what others define as ‘perfect.’ ”

“Be your own best friend,” they suggest, “and counter the critic inside, with well-deserved compliments.”

“When they were both pre-schoolers, my schedule was a major juggling act,” she says. “I felt like a cross between the energizer bunny and a circus juggler.”

Marinoble’s daughters are now 20 and 17. “The teen years have been pretty tough too,” she adds. “They sometimes challenge my authority, but it’s developmentally appropriate for their ages.”

“Parenting couples may have to decide who has a career, and who stays home with the kids,” she says, “but single parents often have no option – they must go to work.”

Paying for daycare is a basic need for many working single parents, which can take a large bite out of their incomes.

President Obama’s 2011 budget includes the expansion of the Child and Dependent Care Tax Credit. “This addresses the prohibitive costs of childcare for low-income families,” says Kalyani Thampi, Research Analyst at NCCP. “We are working with states to adjust their benefit programs and policies that affect low-income families.”

The Family Leave Act of 2009 is currently pending in the legislature. “This would offer paid time off to care for a newborn child or a family member who is ill,” Thampi says.

The President’s budget includes funding to support states in creating their own Paid Family Leave programs. Several states have adopted this legislation, and others are considering it.

Single Mothers From The Start

Some women choose motherhood while remaining single, by adopting or having donor insemination. This trend is on the rise, says Jane Mattes, L.C.S.W., author of Single Mothers By Choice.

A psychotherapist and single mother, Mattes founded the national organization, Single Mothers by Choice. "Our new members doubled between 2000 and 2008, and the rate is still increasing," she says. "In general, we feel it's preferable to raise a child with two loving parents. However, in the absence of a good partnership, and with the high rate of divorce, being raised by a caring and competent single parent is a viable option.”

The group provides support for women considering single motherhood, or actually trying to conceive or adopt. At chapter meetings, members and their children can meet others from similar families.

It Takes A Village

“I like the old African proverb, ‘It takes a village to raise a child’,” Laurie says. “I’m in a babysitting co-op with friends from church and school. The boys have fun with the other parents and kids, learning new games or drawing pictures – it’s a creative time for them.”

“We need others for support, and to share the joyful or stressful times,” Marinoble says.
“Having a sense of community, for oneself and the children, helps you feel nurtured, balanced, and strong.”