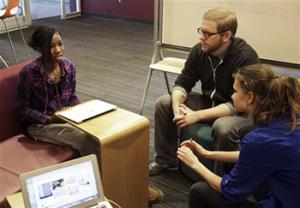 English teacher Tom Rademacher talks with his high school juniors Kierra Murray, left, and Ana Silverman, right, Tuesday, Dec. 2, 2014, at Fair School in Minneapolis. Knowing that the grand jury decision not to indict a white officer who shot and killed a black teen in Ferguson, Mo., would be on the minds of his students, Rademacher put aside his lesson plans and asked them a question: How did they feel? Photo Credit: The Associated Press, Jim Mone.

Students reacts to the Ferguson decision in many ways across the country, some even boycotting classes. In the aftermath of the Ferguson announcement, classrooms across the nation are taking up uncomfortable topics - race, police use of force and poverty, among others - to give students a voice and help them make sense of events.

When his high school English students came to class, Tom Rademacher knew there would be one thing on their mind: a grand jury's decision not to indict the white police officer who shot and killed Michael Brown in Ferguson, Missouri.

So the Minneapolis teacher put aside his lesson plans for the day and asked them a simple question: How did they feel?

"That's the definition of white privilege," student Nia Golston replied. "You get to look away while I, being African-American, have to live like this."

Some teachers are using the discussion to weave in history lessons. One school in the Bronx read Martin Luther King, Jr.'s "Letter from Birmingham Jail."

Others are reviewing primary source documents, like officer Darren Wilson's grand jury testimony, to study the case in detail. Some are just inquiring about the emotions evoked by the killing of a person not much older than most high school students.

In a story so focused on young black people and their communities, "we aren't hearing enough from black teenagers about what they're feeling and what they're thinking about and what their experiences are," Rademacher said.

Sites such as TeachableMoment.org and groups including Facing History and Ourselves, a nonprofit in Brookline, Massachusetts, are providing teachers with guidance on incorporating Ferguson into their lessons. Teachers are sharing their ideas and classroom experiences online with hashtags such as #FergusonSyllabus and #FergusonInClass.

"All the things you hear in the larger community are happening in the microcosm called the classroom," said Steve Becton, social program director of urban education at Facing History and Ourselves. "For the teachers not allowing it to happen, I think it's a missed opportunity."

Becton advises teachers to ask nuanced questions: What is the role of law in society? And if a law seems insufficient, how can it be challenged? What is the relationship between African-American males and law enforcement?

"How do we help students understand that history?" Becton asked. "Ultimately education is not about facts and dates and figures but about participating in democracy and participating in a civil discourse." 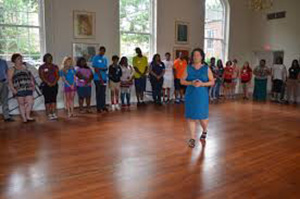 "The goal is to assist students in being able to exercise their First Amendment rights, to speak out on things they feel passionate about," said Holly Priebe-Diaz, intervention coordinator for the Los Angeles Unified School District.

"I teach in a neighborhood where a lot of kids have seen violence," he said. "There is a certain level of mistrust, skepticism."

Elsewhere, the topic is less welcome or completely off-limits. Teachers in one Illinois classroom, for example, were advised earlier this year not to talk about the case in class.

The hesitation sometimes comes from parents or students.

The director of Not in Our School, a network that encourages tolerance, said she received a call from teachers in one Tennessee district who said some students were wary of discussing the case. Teachers told the students they were in a safe space and should feel free to share their feelings, Becki Cohn-Vargas said.

Rademacher has encouraged students to stay focused on having a discussion, not winning an argument. That approach produced a robust exchange of ideas.

"It's just amazing to hear stories from black students because this is something me, as a white person, I don't ever experience," student Liz Fesenmaier said. "I don't get the talk from my mother, 'Be careful of the police.' We get, 'If you're ever in trouble, tell a trusted adult, like a police officer.'"

Rademacher's students also learned to accept the fact that no amount of talking would resolve the issues swirling around Ferguson.

That was "one of the hardest things in having this discussion," Fesenmaier said. "We can't change the world in 40 minutes' worth of class."

This whole situation got blown way out of proportion. I feel that just because Darren Wilson is a white cop he is getting a lot more hate for this incident. I think there were other means of stopping Mike Brown for arrest, shooting him was a bit hardcore but uh I try to look at the situation as if I was in his shoes. If you've ever been in a high tension scenario even somewhat like that, it’s difficult to try to use reason in your actions. Everything happens so quickly, you don't really have time to process all the information. Though I don’t support Darren Wilson I don’t think it’s fair against him in this incident.
Then again looking at it the other way he still killed an unarmed teenager. I’m sure he didn't realize that he was as young as he was, with all the tension,adrenaline and just plain out worry and fear, it would be very difficult to try and think reasonably about your other options, especially with all that attention on the gun before the shots were fired. Honestly I still don't feel like I'm ready to make a decision on which side I support, but I think both had their pros and cons, it’s a very very controversial situation.

YES BOTH SIDES HAVE PROS AND CONS. YOU STATED THAT HE WAS HARDCORE FOR SHOOTING MB. UM HE SHOT AND KILLED MB. WHICH IS WHY IT IS BEING BLOWN OUT OF PROPORTION. THEN AS IT STATES IN ALL ARTICLES THAT HE WAS UNARMED. WILSON SHOULDOF BEEN SENTENCED. THAT JUDGED MUSTHAVE BEEN PAID HELLA MONEYINORDER TO MAKE THAT DECISION IF I WAS THE JUDGE I WOULDNT KNOW WHAT TO DO. IF IT WAS THE OTHER WAY AROUND THAT BLACK COP WOULD OF BEEN BEHIND BARS. END OF DISSCUSSION.

AT THIS POINT YOU CANT REALLY ASK STUDENTS HOW THEY FEEL BEING THE SAME AGE AS HIM AND JUST KNOWING WHAT IM ACCOMPLISHING AND SEEING HE COULD OF HAD THIS OPPORTUNITY AND IT WAS TAKING FROM HIM KIND OF LEAVES ME AT A CLIF HANGER. IM BIAS AT THIS POINT