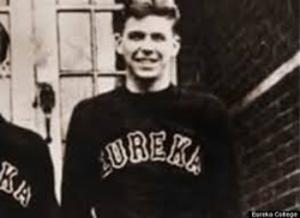 This is Ronald Regan as a college student at Eureka College, where he became a freshman in the fall of 1928. Photo Credit: heymiller.com

Ronald Reagan had three black classmates, making it the most diverse freshman class ever when he enrolled in Eureka College in the fall of 1928. Willie Sue Smith, who became the first black woman to graduate from Eureka College had a connection to Eureka that started well before she came for college in fall 1928 - the same year as Ronald Reagan.

Her parents - Harry and Lula Smith - passed through Eureka on their way to become missionaries to Africa when their daughter was only a toddler. She would go on to become the first black woman to graduate from Eureka College.

Last month, her son and grandson visited the campus for the first time.

"I've heard about Eureka my entire life," said her son, Harry Stewart. "She told me about carrying messages from Ronald Reagan to his then lady friend."

Willie Sue Smith was one of three African Americans in the 1928 freshman class - at that point, the college's most diverse freshman class.

"What we hope to do with this project . is to understand the times of the 1920s, what it would be like for a college student, especial these three students, who would be education pioneers," Rodriguez said.

Stewart and one of his seven children, Sean, were joined by Watts' son, Eudell Watts III, for the campus visit. They looked through photographs and documents involving their ancestors as well as material that Watts brought with him. 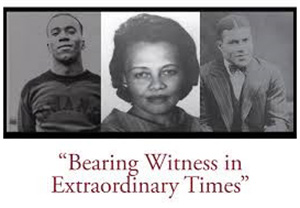 "To me, today's sort of like a family reunion, even though we haven't met," Rodriguez said.

Eureka College, founded in 1855 by abolitionists, had black students before 1928. But they were attending the school, affiliated with the Christian Church (Disciples of Christ), to become ministers or missionaries, Rodriguez said.

These three students were looking at a broader education, he said. "The college was sort of turning a corner at that time," Rodriguez said.

Noting that students staged a strike in 1928 in which freshman Reagan gave a speech and which led to the college president's resignation, Rodriguez said, "These were the students who made Eureka the college it is today."

He said, "I became fascinated by these three students. Each one of them in their own way is an extraordinary story."

Willie Sue Smith was the only one of the three to graduate from Eureka. She went on to get a master's degree from a university in Texas and become a teacher. She was 101 when she died in August 2011, the last survivor of Reagan's Class of 1932.

Watts went on to start his own company, Old Arthur's Barbecue Sauce, named after his grandfather.

As Rodriguez dug into the past, he found that Lula Smith contracted black water fever, a complication from malaria, while serving as a missionary in Liberia.

Emory Ross, a leader of the mission who is buried in the cemetery in Eureka, brought Lula Smith and her then 4-year-old daughter back to the United States. "I think it's fair to say Emory Ross saved the life of your grandmother and your mother," Rodriguez said.

After placing flowers on the grave of Ross, Harry Stewart said his visit to Eureka College has been "mind expanding."

Rodriguez will give a presentation on his research, "Bearing Witness in Extraordinary Times," at Eureka College's Cerf Center.

No one has to defend Reagan's presidency with regards to the advancement of the black community in America. Just compare it to what is going on now under the first black president and if one is honest, black or white, they would rather live in Reagan's America than the times of now.