Black Children Have Higher Rates of Truancy and Suspensions 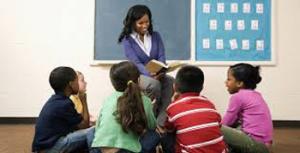 Black children have higher rates of truancy and suspensions in schools in California as in many other states across the nation, according to a study just released.

Black elementary schoolchildren in California were chronically truant and faced suspension from school at disproportionately high rates compared to other students last year, according to a study just released and follows similar research from the U.S. Education Department. Taken together the findings show that racial disparities in American education - from access to high-level classes and experienced teachers to discipline - begin at the earliest grades.

Black elementary students in California were chronically truant at nearly four times the rate of all students during the last school year, the attorney general's office report showed. The rate was higher than that of any other subgroup, including homeless children. The report follows findings this year from the DOE's civil rights arm that indicated black students are more likely to be suspended from U.S. public schools - even as preschoolers.

UCLA civil rights researcher Daniel Losen said he hopes the findings will prompt California Gov. Jerry Brown to sign a bill passed by the Legislature that put an end to suspensions for "willful defiance," which is "The largest racial disparities are in this category," Losen said. "It's a catch-all for all minor offenses." 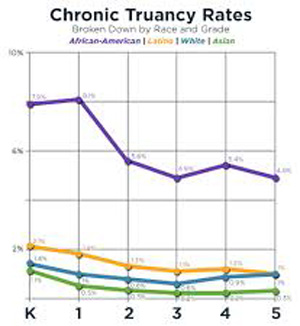 Nationally, the Obama administration has called for schools to abandon overly zealous discipline policies, a move that supporters say bolstered the efforts of districts that were already moving forward with such changes.

For the sweeping attendance gap, the California report states that "African-American children experience many of the most common barriers to attendance - including health issues, poverty, transportation problems, homelessness, and trauma - in greater concentration than most other populations."

California law defines truancy as being absent or arriving more than 30 minutes late without a valid excuse three times in a school year. Students who miss 10 percent of the school year without good reason are considered to be chronically truant, which experts say increases their risk of failing.

The report marks the first time the data has been broken down by race and income levels in California, which officials say is critical information. White House officials applauded the efforts.

"The astounding facts presented in this report shine a light on the need to adopt policies and practices that address chronic absenteeism and other issues that impede our young people's path to opportunity and success," Cabinet Secretary Broderick Johnson and Education Deputy Secretary Jim Shelton, leaders on a minority empowerment task force, said in a joint statement. 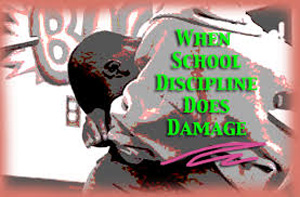 Attorney General Kamala D. Harris has been pushing for the state to adopt a system that tracks the absentee rates of individual students. California is among only a handful of states that do not. Legislation for such a system is also on the governor's desk. Research has found students who are truant starting at a young age are more likely to drop out.

The state's largest district, Los Angeles Unified, has exhibited symptoms of the problems identified in the reports, as it was recently cited in a 2011 investigation that found black students were underrepresented in gifted and talented programs but overrepresented in suspensions and disciplinary actions. The DOE report showed similar findings nationally.

The California study found 37 percent of black elementary students sampled were truant. The rate was higher than any other subgroup, including homeless children, and it was about 15 points over the rate for all students.

Overall, more than 250,000 elementary students missed 10 percent or more of the 2013-14 school year, or at least 18 days. The absences were highest at the kindergarten and first-grade levels when children learn to read.

The attorney general's office partnered with a private company, Aeries Student Information System, to compile the data from 32 school districts.